Another Trade With Michael 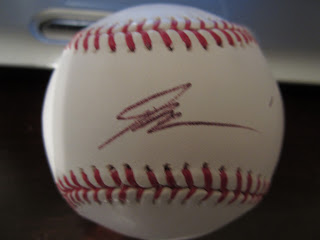 One of the many perks of having this blog is that it has helped me make some friends among fellow collectors.  One person I have met recently is a guy named Michael, whom I traded with at Fan Fest in January.  Michael had his eyes on some of the signed post cards as well as a few game used baseballs I picked up while at Fan Fest.  In return for some of the post cards, Michael sent me the above Dontrelle Willis signed baseball.  I had a chance to get Willis a couple years ago off of Ebay for $0.99, but I drug my feet and missed out.  Dang.  Oh well, I have him now.  I was always a fan of Willis and I hate to see that his career has been derailed like it has. 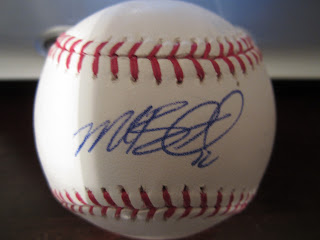 Another ball I got from Michael was this Mark Reynolds signed ball.  I hate that Reynolds left the O's to sign with Cleveland, but I feel like losing his 200+ strikeouts paired with a returning Nolan Reimold makes his loss not as bad.  Especially if Nolan can hit the 30+ homers and drive in 100 like I feel he  is capable; All while batting 50-60 points higher than Reynolds.  Anyway, I still like Reynolds and am happy to add his auto to my collection. 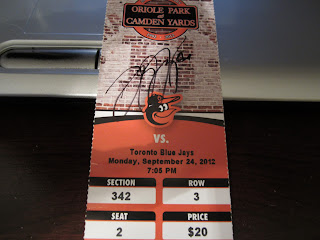 Michael also threw in some signed tickets that he had, the above Darren O'Day and the below Johnny Damon.  O'Day is probably my favorite reliever on the O's right now, and Damon, well, he is just a great player, even though he isn't an Oriole. 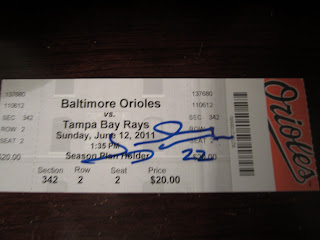 Thanks for the trade, Michael!  I am amazed at the awesome O's stuff you have and I hope we can match up again on a trade!
Posted by William Regenthal at 5:58 PM

Nice try to pull one over on us. Looks like Chris signed that first ball. Dontrelle couldn't have that sloppy of a signature! haha!