Another Trade With Kalib 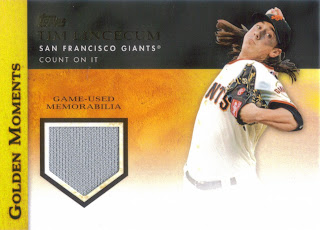 I completed another trade with my new friend Kalib over at "Cubs Cardboard" recently.  I sent him some random Cubs cards, including a couple vintage ones.  He recently posted some trade bait on his blog, so I had to ask for the above Tim Lincecum relic for my son, Chris, and the below Andrew McCutchen 2013 Topps Blue parallel for my own PC. 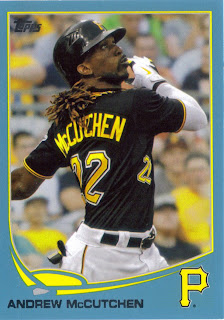 I think the blue and yellow on the McCutchen really pop off of the card as you may be able to see in the scan.  I think they go really well together.  I definitely need to get more parallels from 2013 Topps! 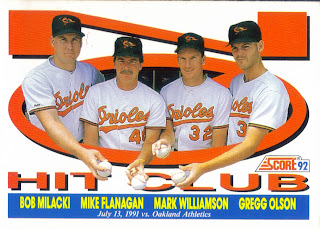 Finally, Kalib also included some random Orioles cards that he found in a few shoeboxes and one of which was the above 1992 Score No Hit Club featuring the combined no hitter that was thrown on July 13, 1991 (21 years ago!!!).  Bob Milacki, Mike Flanagan, Mark Williamson and Gregg Olson combined to no hit the A's that night.  I really like this card because it features Mike Flanagan.  Flanny is still sorely missed by all Orioles fans, since he took his own life in August of 2011.  To me, that was probably the darkest of days for any Oriole fan in recent memory and it still is tough to think about.  I always feel bad for him and his family whenever I see his cards.  I plan on creating a PC of him sometime soon.

So, thanks again for the trade, Kalib!  I enjoy kalib's blog and I, again, recommend you all to follow it!
Posted by William Regenthal at 5:38 PM