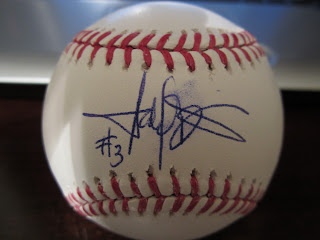 This counts as a completed trade.  I sent Drew a Jim Palmer signed baseball for his new HOF signed ball collection and in return, Drew sent me a signed ball of one of my favorite players, Harold Baines.  I met Palmer again this year at Fan Fest, and since I already had him on a ball, I checked with Drew to see if he would want him for his HOF collection.  He told me he was about to meet Harold Baines at a card show, so I decided that would be a good swap.

Jerry Reinsdorf, owner of the White Sox, has apologized to Baines on numerous occasions saying that he traded Baines several times into situations that cost him at bats that he would need to eclipse the 3,000-hit mark.  I do think that if Baines had 3,000+ hits, he would be in the Hall of Fame by now.  I think he might get an extended look via the veterans committee, but I doubt he will be enshrined.

Thanks for the trade, Drew!  I really appreciate it and I know we will be doing a lot more trading in the future.
Posted by William Regenthal at 6:34 PM