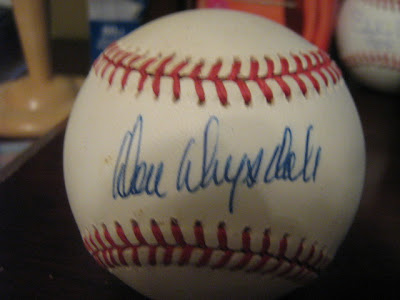 So, I posted yesterday about making a trade at the card show - My 2008 Stadium Club Pujols triple relic/auto plus a Felix Hernandez auto, Pedroia Relic Auto and another auto that escapes my memory right now for the awesomely old (authenticated) Mazeroski autoed ball and the beauty above... Don Drysdale JSA authenticated autoed baseball!

So, by my unofficial count, this Drysdale is HOF ball number 26. It feels like I have already said I had 26 baseballs before this one but I will get to that in a later post.

Anyway, I was really pleased with the haul I got in return for those autoed cards. I knew the guy I traded the Pujols for would be able to turn it around (along with the other cards) for a profit, but I had been looking at baseballs of several different Hall of Famers and Drysdale is always very expensive. I figured, why not go ahead and go for it while I have the chance and some trade bait instead of dropping cash on one on Ebay and getting some bad news about it later on (more on that later.....)

I hope you guys enjoy the baseballs as much as I do. I still have a LOT more to talk about concerning the card show, so please stay tuned!
Posted by William Regenthal at 10:07 PM

Congratulations. It sounds like that was a pretty complicated deal to work out.