Drew is so lucky. He knows it, too. He is able to meet a ton of former players at the White Plains (NY) card shows, while I have yet to see any big names at the Raleigh (NC) shows... He has met countless former players (several Hall of Famers, too!!) at past shows. Another good thing about Drew, though, is that since he is a really good friend, he will agree to get a signature or two for me if I ask nicely enough. The last show he went to was no different, where he got 2 signatures for me. Here is the first: 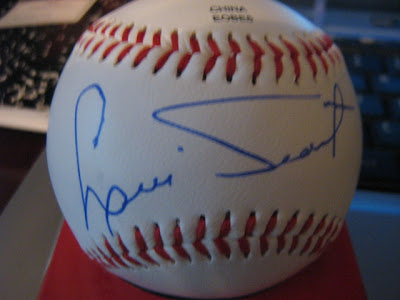 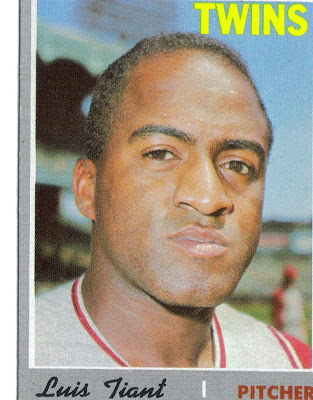 Tiant was a good pitcher, winning 20+ games four times in his career, but he also lost 20 games in one season as well. He never won a World Series, or the Cy Young Award. He managed to stay on the Hall of Fame ballot every year he was eligible (1988 to 2002) but never got close to the 75% approval needed to gain election.

Once again, Drew helped me out and I am very grateful. I think the ball looks great!
Posted by William Regenthal at 8:34 PM

Tiant wasn't the most excited guy there by any means, but I'm glad he was still able to make both of us happy. He's got a nice signature, and an even sweeter moustache. Hope you enjoy!