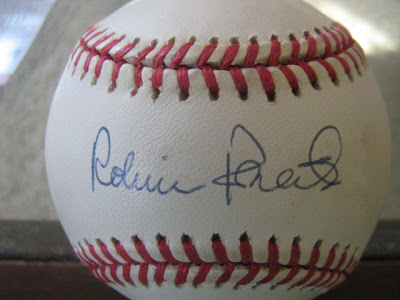 I got this sweet PSA authenticated Robin Roberts signed baseball in the mail today. I got the ball for $37.00 with free shipping. Roberts is my 24th baseball signed by a Hall of Famer. Not too bad. I have a long ways to go, but I'm pretty happy with who I have so far. I'm still baffled at how cheaply I obtained this ball. Roberts is by far the cheapest Hall of Fame baseball I have ever seen, so I had to jump all over this ball when I saw it. I wish it was inscribed with his HOF year, but for what I paid, and that it is authenticated, I really have no room to complain.

I was listening to the Orioles game last week when they were in a rain delay in Kansas City. During the delay the Kansas City announcers interviewed Orioles Hall of Famer Jim Palmer. I never knew this, but Palmer was paired with Roberts during his (Palmer's) rookie season. Roberts became Palmer's mentor (and roommate) that season and was one of the people responsible for molding Palmer into the Hall of Famer that he became. I thought this was really cool to hear. Roberts was an awesome pitcher, for sure, so I'm very glad to have his autograph. I also just remembered that when I did my interview with Virgil Trucks, he remarked on how Roberts was one of the best pitchers he had ever seen pitch.
Posted by William Regenthal at 9:16 PM

For the price you got it for, thats a steal in my opinion! Nice job on knocking off another Hall of Famer, and hopefully theres more to come!