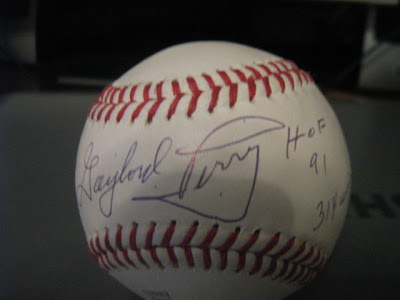 I mailed a ball and a check for $25.00 to Gaylord Perry on April 25, 2011 and got the signed ball back today. I thought that since Perry lived in NC, it wouldn't take as long for the ball to get here, but it took him almost 2 weeks to claim his box. I'm sure he was busy. Thankfully, he claimed the box and signed my ball. He inscribed the ball with his HOF induction year (1991) and his career win total (314). Not bad for $25.00 plus shipping costs. I'm really happy with the ball, of course. Even cooler is that the bus driver that I had in high school grew up with Gaylord and Jim Perry. On the way to school, he would tell us stories about playing sandlot ball with the Perry brothers. That definitely made the ride to school so much more bearable.

Perry is now my 25th HOF auto on a ball. I still have a long way to go, but I think I have made a good dent so far.
Posted by William Regenthal at 8:08 PM

Awesome baseball man! The story behind it is cool too, I love hearing stories about people growing up with stars! I've got a few family members to relate with