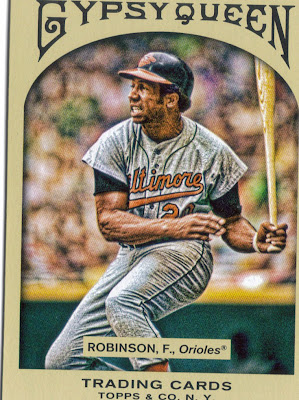 The scans kind of suck, because the cards kept sliding on the glass, but here we go with 2011 Topps Gypsy Queen. I picked up 2 packs from ym local card shop at $7.50 a pack (!!!!!!). I got some decent pulls, as far as players go. The above Frank Robinson was my lone Oriole. A pretty cool shot of him, nonetheless. 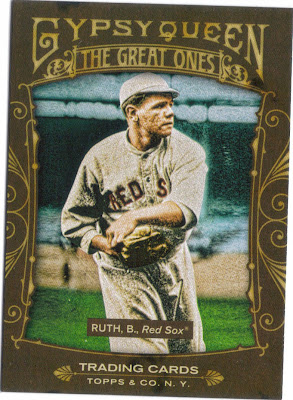 This Babe Ruth was pretty sweet. Especially since it depicts him in a Red Sox jersey. 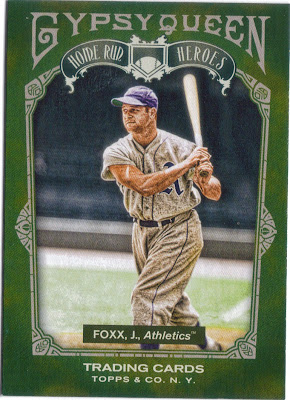 I was also happy to see Jimmie Foxx in my pack. I don't have very many Foxx cards, so it is always cool to see him pop up. 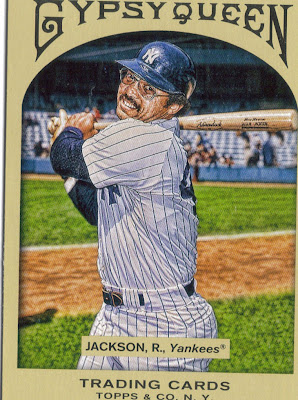 I know a couple Yankee fans who would be happy to have this Reggie Jackson. I have already promised it to my good buddy Drew. The card looks pretty good, though, so I'm sure he will be happy with it. 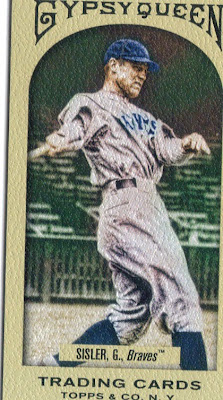 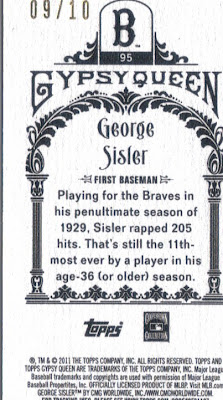 Finally, I pulled this George Sisler mini numbered 9/10. I don't know if it is a parallel based on other minis, but seeing that it was a 9/10 was pretty cool. Since the Browns were the team that became the Orioles, and Sisler is probably the greatest Browns player there was, it is kind of cool to have the card.

Overall, I'm a little underwhelmed with Gypsy Queen, especially since the pack price was so high. It would have been cool to get a relic or auto, but knowing my luck, I'd pull Mark Prior. Blehh. Overall, the design is ok. I feel like the market is flooded with vintage sets. I think it is about time to put the re-issue concept to bed for a while.
Posted by William Regenthal at 9:37 PM

That Sisler is a "Leather" mini, the surface of the card is textured like leather... ish... nice pull!!

Thanks! I was wondering about the significance. It is a pretty cool card, not too sure about the leather, like you said, it is more of leather-ish.

Yea, I've pulled three of them so far. They are pretty sweet lookin' mini's and the fact that they are serial numbered to /10 makes it even better.