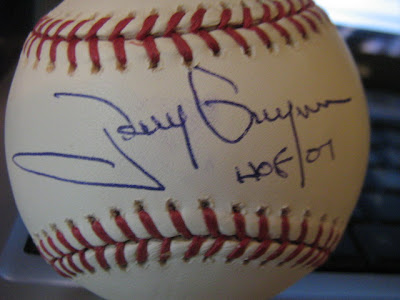 I got this sweet baseball signed by Tony Gwynn off of Ebay and it arrived at my doorstep yesterday afternoon. I had been checking on prices to Gwynn baseballs ever since I learned that he had battled mouth cancer after years of smokeless tobacco use. I have always been a big fan of Gwynn. I was real ashamed when I heard from my good friend P.A. that Gwynn was less than personable at a recent signing last summer in Durham. I'm hoping it can be chalked up to maybe it being because Gwynn had learned of his diagnosis with the cancer instead of it being because he was a jerk. From everything else I have heard, he is one of the nicest guys in baseball. I take P.A.'s word on it though, because you seriously can't find a nicer guy than him.

Gwynn is my 29th Hall of Famer.
Posted by William Regenthal at 6:00 PM

Congratulations. Glad to see you score another HoF auto ROMLB.