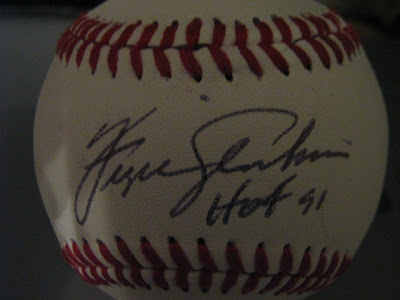 I got home on Tuesday to another TTM success - Hall of Famer Fergie Jenkins. He charges a $25.00 fee, so I sent a check along with this ball in hopes that I could get his signature. Jenkins didn't disappoint; the auto looks great! I mailed to him on May 7, 2011 and got the ball back on May 17 - making him a 10-day TAT. Not too bad! Mostly known as a Cub, Jenkins began his career as a member of the Phillies in 1965. He was then traded to the Cubs in 1966 and played there until moving on to Texas and Boston followed by returning to the Cubs before calling it a career. Jenkins went 24-13 for the Cubs in 1971, earning the 1971 NL Cy Young Award. He went 25-12 for Texas in 1974 and finished second in the Cy Young voting that year to Oakland's Catfish Hunter. Jenkins was elected to the Hall of Fame in 1991 on 75.4% (his 3rd time on the ballot). With Gaylord Perry, I have 2 of the 3 inductees from that year; needing Rod Carew to complete the 1991 Ballot. Jenkins is my 28th Hall of Famer and my 16th TTM success.
Posted by William Regenthal at 6:11 PM

Nice success man! I wish I got a chance to meet him at the last card show, oh well.

Awesome! Congratulations on another HoF auto. I always love hearing about your collection.