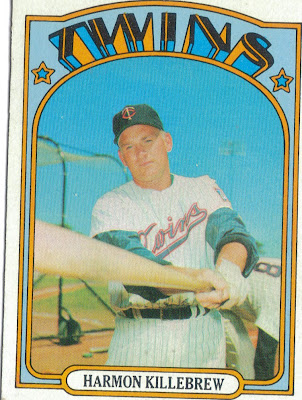 We all, unfortunately, knew this day was coming sooner than later, but I really didn't think it would be this soon. I was real sad on Friday when I got the text message from Pete saying that Harmon Killebrew elected to cease treatment for his esophageal cancer and enter into Hospice care. A mere four days later, Killebrew passed away, leaving a gaping hole in the world of Minnesota sports and baseball in general. Killebrew was a larger than life legend in Minnesota and the greater northwest. He is the person responsible for the success of baseball in Minnesota and one of the most popular players in Twins history. It has been a rough six months for the Hall of Fame, losing Bob Feller, Duke Snider and now Killebrew.

I'm real sad to hear the news of Killebrew's passing and I know the whole baseball world will miss him.
Posted by William Regenthal at 10:12 PM

Yes, very sad news for the Minnesota community. He was not only the face of the Twins, but of Minnesota, too.

Thanks for this post. Killebrew was my boyhood hero, and I wrote a blog about him in tribute that you might enjoy: http://mytwoinnings.blogspot.com/2010/12/good-luck-harmon.html