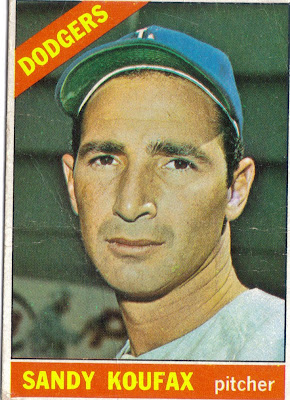 A while ago I wrote about players who may have hung on a little too long, and used my 1973 Topps Willie Mays as an example. you can read the post here.
.
I got this card at the shop from a collection that was brought in, same as the 1967 Mantle I posted about here. This is Koufax's last Topps base card. He would retire after the 1966 World Series with the desire to still have the ability to have the full use of his arm later in life, rather than pitching a few more seasons and risk permanent damage. Koufax won 165 games in his career, but one has to think that if medical technology that is available today were available back then, he would have been able to pitch a lot longer. Something I've always found interesting is that his final game was a loss in the 1966 World Series.
.
Koufax pitched for the Dodgers in Game 2 of the Series against the Orioles and was matched up against a young 20-year old pitcher named Jim Palmer. The Dodgers committed 6 errors in the game and the O's won by a score of 6-0. The last batter that faced Koufax was Andy Etchebarren who grounded into a double play.
.
I have 3 Koufax cards in my collection so far, his 1955 Topps RC, 1956 Topps and 1966 Topps.
Posted by William Regenthal at 7:05 PM

Nice card no matter what the condition.

I have this same one...autographed. :)