I got this card from a guy who used to come in the shop all the time; he was looking to unload some vintage stuff and quoted me a decent price. It was a little more than I wanted to spend, but it was for this card, as well as several other vintage cards that I may get around to posting as part of my 'Hidden' series. 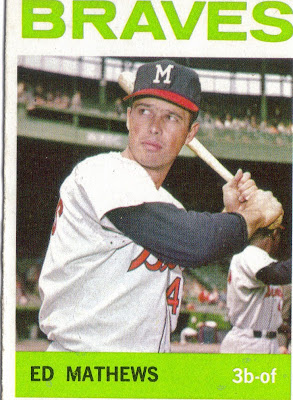 I'm a big fan of the 1964 set and definitely want to build it sooner rather than later. I think they are very sharp looking cards. I liked the Mathews, because at the time I didn't have too many of him. As it stands now, I have his 1955, 1956 and 1964 Topps and his 1955 Bowman. Not too bad. From what I could tell, his 1952 Topps rookie card is the second-most valuable card in that set (behind the Mantle, of course). I have a lot of friends who are Braves fans, so I have taken an interest in their players. Mathews was a heck of a player for sure, and I just imagine a lineup featuring Mathews and Hank Aaron as well as a rotation that featured Warren Spahn. It's no wonder they won the 1957 and 1958 NL pennants and the 1957 World Series.
Posted by William Regenthal at 4:06 PM

Sweet looking card!! Matthews was a heck of a player!

Thanks for pointing that out Gary. I have edited my post. I should have done a little better on my research.