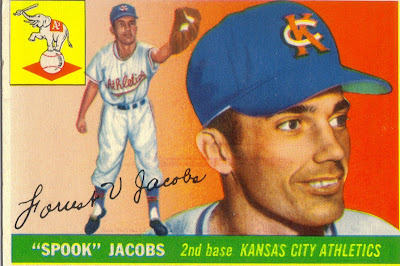 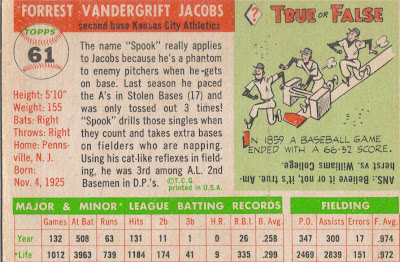 Forrest 'Spook' Jacobs (b. 1925) played from 1954 to 1956 for the A's and Pirates. He had 164 hits and 0 home runs in his career. He earned the nickname 'Spook' because of his speed. Jacobs was a teammate of Tommy Lasorda's on the 1956 A's and found himself opposing and being thrown at by Lasorda while in the minor leagues in 1957. After Lasorda knocked Jacobs down, Jacobs charged the mound, going after Lasorda, then turned his attention to the opposing second baseman, Sparky Anderson.
Posted by William Regenthal at 12:00 PM