Another legend of baseball. The man who broke the infamous color barrier, Jackie Robinson! 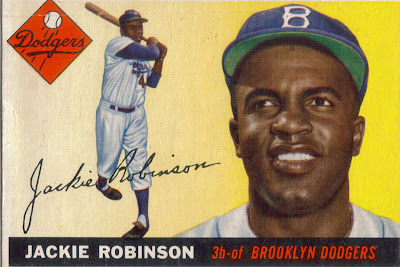 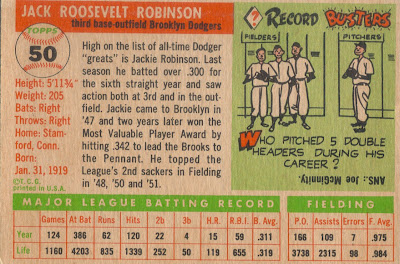 Jackie Robinson (b. 1919 - d. 1972) played in the majors from 1947 to 1956, all for the Brooklyn Dodgers. He was primarily a second baseman, but playedfirst base, shortstop, third base and outfield as well. He was the 1947 Rookie of the Year and won the World Series in 1955. Robinson's uniform number (42) was retired by all of MLB on April 15, 1997. He was elected to the Hall of Fame in 1962 on 77.5% of the ballot.
.
No one can deny Robinson's cultural impact on the game. Many people don't realize how upset Negro League players of that age (such as Satchel Paige and Josh Gibson) were when Robinson was chosen to be the player who would break the color barrier. He interviewed with Branch Rickey for three hours and was asked to agree that, no matter how bad the racial taunts were, Robinson would agree not to fight back. Rickey believed that Jackie Robinson was the perfect choice for that monumental task, and Robinson didn't let him down.
.
Many also don't realize that Robinson was traded from the Dodgers to the arch-rival Giants after the 1956 season. The trade was never completed, however, because Robinson announced his retirement from baseball through an article in Look Magazine in January 1957. He was another legendary Dodgers player who would end up not traveling west when the team uprooted from Brooklyn to Los Angeles. Robinson's health had been in decline due to complications from diabetes; he was nearly blind by the time he died. He died in 1972 at the age of 53 from a heart attack.
.
(DECEASED 29)
(HALL OF FAMER 8)
Posted by William Regenthal at 12:00 PM