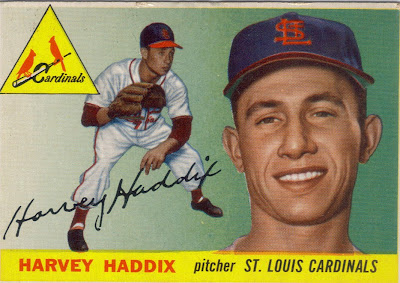 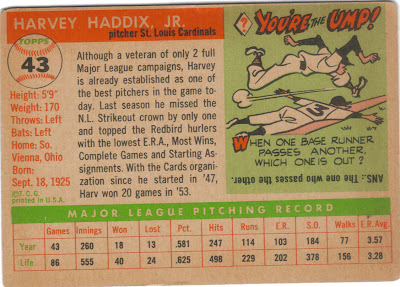 Harvey Haddix (b. 1925 - d. 1994) is mostly known for having thrown one of the greatest pitching performances of all time. A 12 2/3 inning one-hit complete game that he eventually lost to the Milwaukee Braves in 1959. In that game, he pitched 12 perfect innings, the longest stretch of perfect innings in major league history. He was also the winning pitcher in the World Series game in which Bill Mazeroski hit his memorable home run.
.
Haddix ended his career after playing from 1952 to 1965 for the Cardinals, Reds, Phillies, Pirates and Orioles. His career record was 136-113, 3.63 ERA and 1,575 strikeouts. He was a member of the 1960 World Champion Pirates and was also a coach for them during their championship season in 1979.
(DECEASED 25)
Posted by William Regenthal at 12:00 PM