I got the idea from Drew to send a ball to former pitcher Virgil Trucks for a TTM and I was not disappointed. 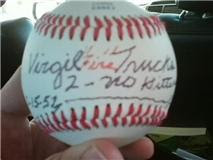 Our lab rep sent me 3 baseballs a few months ago because he knew I was going to a bunch of minor league games to get autos and he thought it would be a nice incentive to continue to order lab kits from him instead of trying out other labs (yeah, like I'd stray haha). I kept the balls in my truck for a while and finally got the nerve to send them off for autos (since the minor league season is over). The first try was Virgil Trucks. Trucks pitched in the majors from 1941 to 1958 for the Tigers, Browns, White Sox, A's and Yankees. He is mostly known for having thrown 2 no hitters in the 1952 season. 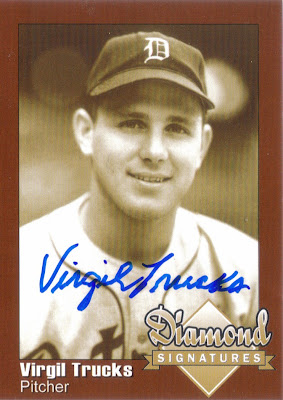 As you can see, I got several bonuses along with my ball. Trucks sent me a signed baseball card, the below stat sheet and a note he wrote me about his book. 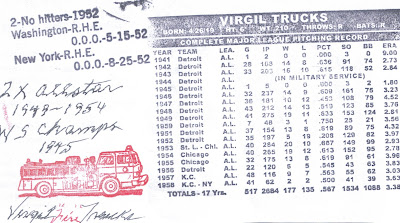 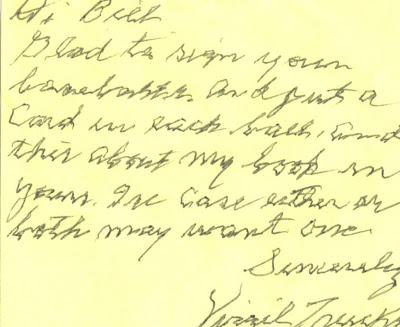 I hate that my scanner kind of cut the edges of the note off, but you can see pretty much everything he wrote. I think it was really cool that he took the time to write me a note. After I got my stuff from him, I promptly wrote him back and included a check for $30 so I could get a copy of his book. I really look forward to getting the book, as I love to read about the history of baseball.
.
So, if any of you want to try a TTM, the first person I suggest doing would be Virgil Trucks. He seems like a nice man who is definitely appreciative of fans taking the time to write him. Being that he is 93, I'm sure he loves that people still think of him and remember his accomplishments. Sometimes I wonder if players google themselves or if they even read the blogs, but Mr. Trucks, if you can see this, I want to thank you from the bottom of my heart. This was by far the coolest TTM I have ever gotten. Also, thanks Drew for pushing me to send to Trucks, because it sure was worth it.
Posted by William Regenthal at 9:59 PM

That is a great TTM success story. Congratulations.

How do I write Mr. Trucks? I'm a life long Tigers fan, and would love to write to him and purchase a book from him.

What a great piece! How do I get in touch w/ Mr. Trucks? These veterans who served w/ my grandfather in WW2 AND played our favorite sport of baseball are absolute treasures.

Thank you for the offer to help, feel free to email me any info at ryanlamonica@hotmail.com.

Thanks and enjoy the hunt!