Another Hall of Famer on Moms Ball - Red Ruffing 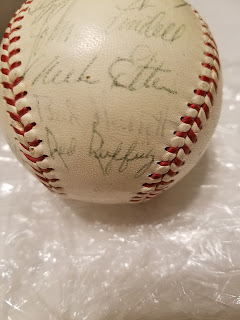 Another Hall of Famer that I can cross off of my list, thanks to my mom, is Red Ruffing.  Mom really nailed it with this baseball, as the guys that are on it are ones who would be super tough to get on single signed baseballs.  So, this multi-signed ball really helps the collection a lot.

When Ruffing was traded from the Red Sox to the Yankees, then-Yankees manager, Bob Shawkey, a former pitcher, was convinced he could get better results out of Ruffing by changing his pitch delivery.  The changes worked, and the trade of Durst for Ruffing is considered one of the most lopsided trades in MLB history.

Red Ruffing was elected to the Hall of Fame in a run-off election in 1967, his final year of eligibility on the ballot.

Ruffing is my 149th Hall of Fame signature on a baseball.
Posted by William Regenthal at 4:15 PM