My Thought On 2015 Topps Museum Collection 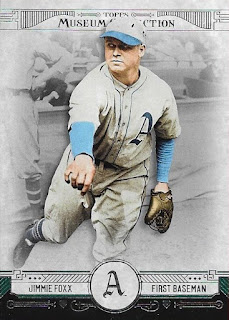 When it first came out, I picked up a box of 2015 Topps Museum Collection.  It was pretty expensive, and I know I could have just gone and bought what I wanted off of Ebay.  I got the box because I do dream of getting that one huge hit, you know, a 1/1 bat nameplate or something.

I didn't pull anything like that, but I did do ok, I guess.  I had a couple PC hits like the above Jimmie Foxx base card.  Man, it would be awesome to pull a Foxx relic.  Regardless, this is a great card of The Beast, so I was glad to pull it. 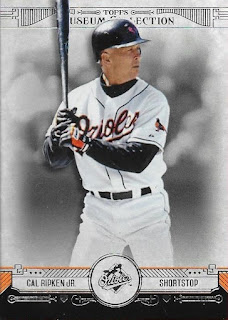 Speaking of pulling cards for the PC, you all know how I love to pull cards of Cal that I don't already have.  This is a nice Cal, and will be assimilated into the PC, buried among the hundreds of other Cal cards that I have, and that'g a good thing. 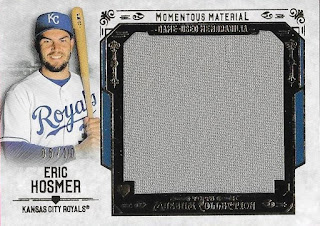 I got a really low numbered Jumbo relic card of Eric Hosmer.  This card already has some miles on it.  I had agreed to a trade with a new kid on Instagram for a Sonny Gray relic, but the kid failed epically to scam me.

He was clearly winning the trade anyway, but I liked the Sonny Gray he was sending, so I agreed to it and we were to send at the same time.  He got the card, and I got a PRE (that's right a plain RED envelope), with one stamp and what did not feel like a thick relic card inside.  Sure enough, out falls a 2013 Topps base card of Mike Napoli and a note thanking me for my business.  When prompted about whether or not this was a joke, the kid tells me "Oh, I'm sorry, I must have sent you the wrong card by accident..." and sends me a tag of the person the Napoli card was intended for... the kid's PERSONAL Instagram account.  His response to that was "Oops, I sent the wrong link..."  Yeah, ok.  So, I called the kid out on Instagram, and also reminded him that I still had his address and screenshots of our trade discussions that I would be more than happy to send his parents.  Needless to say, I got the card returned to me in only a few days.  Again in a PRE...  With one lonely stamp.  Subsequently, the kid closed his Instagram account, as word had spread that he had scammed a few other folks.  So, yeah, I still have this 5/10 Hosmer relic card and I do intend to trade or sell it. 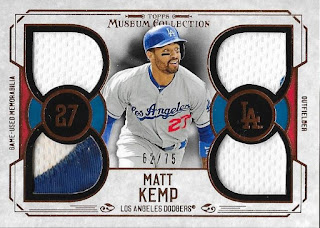 Finally, I pulled this Matt Kemp patch card that is numbered 62/75.  If you look closely at the northeast relic, there is a tiny little piece of blue patch there as well.  I didn't actually catch that until I scanned the card.  Pretty cool, right?  This card is also possibly going to be available, if my friend Michael decides that he doesn't want it.

I had also pulled a Dalton Pompey auto and a Yordano Ventura dual relic/auto.  The Ventura was sold to my buddy, Noah, and the Pompey was traded for the damaged Hunter Harvey manufactured logo and auto that I showed a few weeks ago.

In all, I liked busting the box of Museum Collection, even though I didn't really get my money's worth out of it.  The Kemp and Hosmer cards are solid, but I won't make up for what I spent.  It would have been a lot better if I pulled some hotter players, like Trout or Harper, but that's the name of the game.
Posted by William Regenthal at 5:53 PM