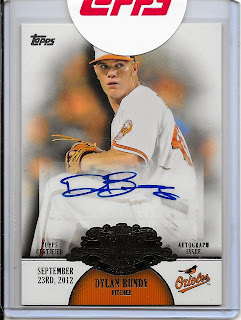 Last year, Andrew and I went in on a Matt Holliday redemption card from the 2013 Postseason.  He sent me some money, and I picked up the redemption card, since I had an account on Topps.com.  I redeemed the code and waited patiently for the card to come.

Meanwhile, this year, I redeemed one of the "Call Your Shot" promotion cards and won a relic/auto card.

This would set up a bunch of redemption confusion.

Andrew grew tired of waiting over a year for the Holliday card to come in, so I called Topps to inquire about the card.  They said that Holliday was under contract to sign, so it would come... eventually.

Andrew and I waited a little while longer, until he finally asked me to call Topps and have them replace the card.  So, I called and they asked what team(s) I would be interested in as a replacement.  I told them that he would want Cardinals, but Orioles would be ok too.

So, about a week later, I receive a package in the mail from Topps.  A Giancarlo Stanton relic/auto from 2013 Topps Triple Threads.  Wow, Andrew really lucked out on that one.  I called Andrew up and told him that Topps replaced the Holliday with the Stanton.  Andrew was elated, and I put the card in the mail the next day.

That day, I get another package from Topps.  Inside this package is the above Dylan Bundy auto, and a note from Topps apologizing for the delay on the redemption and here is my replacement.  I think to myself, well, where did the Stanton come fro.... wait a second!  I forgot all about the relic/auto from the Call your Shot promotion.  Oops.

I sent Andrew the wrong card.  He got the Stanton, and I got this Dylan Bundy.  It worked out, somewhat.  I mean, Bundy in no way compares to Stanton.  We had looked up what the Stanton was selling for on Ebay, and it was around $40-$50, and $40 was what he had paid for the Holliday.  So, I told him that I was cool with him just keeping the Stanton, since it kind of helped him recoup his money.  I got lucky on the Call Your Shot card, so landing the Bundy was fine with me.

This is one of the main reasons that I hate redemptions, though.  It took over a year to get something for the Holliday.  I actually have a card pending from Panini that is almost a year old as well.  Guys need to get on the ball, so to speak.
Posted by William Regenthal at 7:34 PM