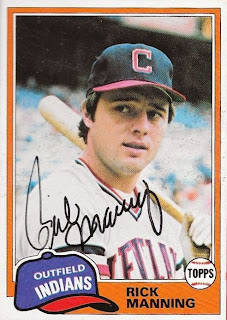 Yeah, a total of 0 people will get the movie reference in the title.  Anyway, I'm getting toward the bottom of my "to be blogged" pile.  I have had a stack of cards that came in a care package from my friend, Anders, that has been sitting here for months.

Anders is a really nice kid from Minnesota who had traded with me a bunch.  For one reason or another, he has moved on from cards, but still "likes" and comments on some of my Instagram posts.  I miss chatting with him, but I know how life sometimes gets in the way of our hobbies.  I'm hoping he comes back soon.

Anyway, in the package was a bunch of signed cards from Anders.  Along with the above Manning, there were signed cards of: Jaret Wright, Len Barker, Brian Tallet and Cody Buckel.  Anders also included unsigned cards of Mo Vaugh and Masahiro Tanaka.

I especially likes the Manning and the Barker because they were on 1981 Topps.  That set is always underrated, and I tend to forget about it from time to time.  I never actually built the set, I bought it from a store that was closing for a really cheap price.  I tell myself that I will actually build it at some point.  We'll have to see if I follow through.

So, thank you so much for the package, Anders.  I'm sorry I let it lag this far behind!
Posted by William Regenthal at 9:42 PM