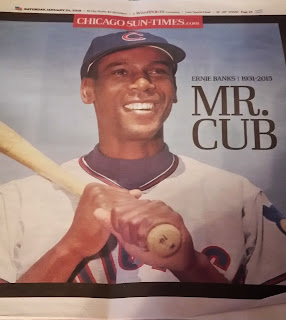 When Ernie Banks passed away on January 23, 2015, the first person I thought of was my good friend, Max.  He lives in Chicago and is a die-hard Cubs fan.  I knew immediately that I should reach out to him, so, I texted him, then we got on Skype together to chat.  Naturally, he was devastated to learn of the Cubs legend's passing, so I did my best to "be there" for him.

During our conversation, it dawned on me that I really wanted a copy of a Chicago newspaper documenting Banks's passing.  I have a copy of the Winston-Salem Journal article from when Mickey Mantle passed away (since I was 15 at the time, and that's where I was living), that I recently found folded inside a magazine.  I thought it would be nice to have something from Chicago commemorating Banks's life, so I mentioned it to Max.  He remarked that he hadn't even thought to do that, so he grabbed a copy for himself as well.  He almost had an opportunity to go to the public memorial for Banks, but his dad had something come up at the last minute and they were unable to attend.

I really appreciate Max's picking this up for me, and getting it to me in really good shape.  It is tough to ship a newspaper, and he did a great job in shipping it.
Posted by William Regenthal at 5:55 PM