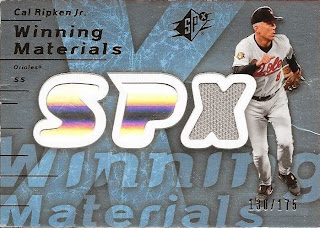 A while ago, I sent an Orioles rally towel to a guy named Grant on Instagram and YouTube, since we had both followed each other for a while, but hadn't made any deals.  I figured, I'd hook him up, since I liked his YouTube channel and Instagram page.

He turned out to be a pretty cool guy, and reciprocated the gesture with a care package of his own.  What was in the package was what really surprised me.

The above Cal Ripken 2007 SPX relic card is a bit damaged, but I'm not complaining at all.  Just having it in my hands and being able to add it to the Cal PC is great.  The card is numbered 130/175.  I can't believe that Grant included this in the care package. 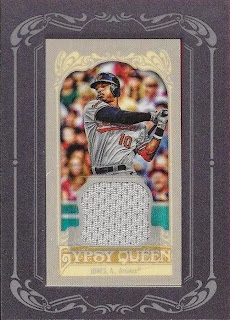 The Cal card wasn't the only thing in the package, though!  Grant also included this 2012 Gypsy Queen Adam Jones relic.

I love these framed relic cards from GQ and A&G.  I think the frames add something to the cards.

Thank you so much for the package, Grant!  I hope you all can check out Grant's YouTube page: Grantsautos.  Subscribe to him!!
Posted by William Regenthal at 7:39 PM