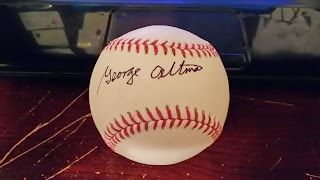 While I was heading to a site for work last Friday, I stopped in Starbucks for some coffee.  While I was waiting for my coffee, I noticed something on their community bulletin board advertising some baseball exhibits in a nearby county that was to showcase baseball and players from that county.  Since we were free tonight, my wife, son and I all made the 45 minute drive to Goldsboro, NC to meet former big leaguer George Altman.

Altman (b. 1933) played in the majors from 1959 to 1967 for the Cubs, Cardinals and Mets.  He was born in Goldsboro and now lives near St. Louis.  He was a 3-time All Star (he played in two All Star games in 1961); He hit a home run for the NL in the first 1961 All Star game that forced extra innings, and the NL would go on to win in 10 innings.  He was the first player (and only left hander) to hit two home runs in the same game off of Sandy Koufax. 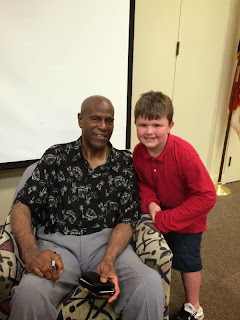 The evening started off right, when a video montage was played as tribute to Altman with the song "All The Way" in the background (as sung by Eddie Vedder during the Pearl Jam concert at Wrigley Field in 2013).  So, I was happy right off the bat when this thing started. 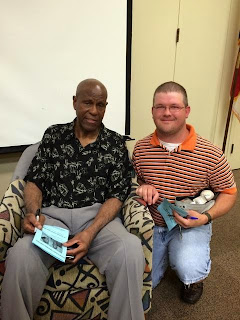 Altman spent several minutes discussing his life growing up in Goldsboro, and his rise to the majors, and subsequent time playing in Japan.  He was really funny and told stories about several Hall of Famers, such as Satchel Paige, Ernie Banks and Leo Durocher.  The crowd was allowed to ask him some questions, so I asked him "Of all the players hemet in his career, who was he the most in awe of meeting?"  His response was Willie Mays and Hank Aaron. 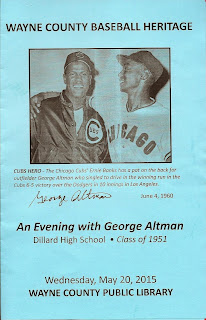 We had gotten some baseballs signed that we brought with us, but I also wanted to thank Mr. Altman for coming back to NC and doing the discussion.  When we went back up, I got my program signed, and the moderator of the talk gave Chris a baseball.  Chris made sure to tell Mr. Altman that he, too, was a player.  Chris then told Mr. Altman about his 3-RBI performance from last night.  Mr. Altman was very impressed.

He was really nice to us, and I enjoyed going to this event.  I hope the Wayne County Public Library does something like this again next year.  From what I gathered during the talk, they have done this quite a bit over the last few years, with several former big leaguers coming to town to talk.
Posted by William Regenthal at 10:00 PM