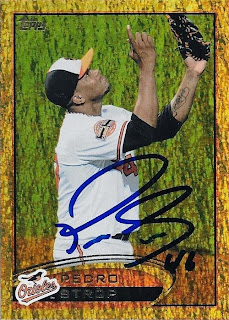 I haven't posted in the last few days because I went to a race that my dad sponsored, and was competing in, along with my brother.  So, after spending a few days back home with my parents and immediate family, I am back in Winterville and able to scan cards.

Before I left, I received a box from my awesome friend, Max, that I wanted to wait to open when we could Skype together.  We were able to Skype today, so I opened the box, which was packed with over a pound of cards.

One of the many highlights was a stack of IP and TTM autos that he sent as a "just because."  The best of the bunch had to be the above Pedro Strop golden parallel from 2012 Topps.  You have to see the card in person to truly appreciate how cool those golden cards look when signed.  He also included a signed Jason Hammel and a couple Koji Ueharas.  I'm really grateful that Max included these, when he could have easily traded or sold them for a lot more. 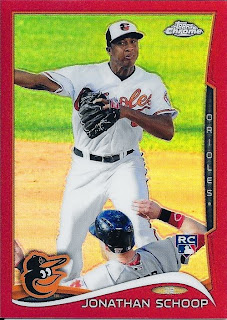 One of the coolest cards in the bunch was this red parallel from 2014 Topps Chrome.  It is numbered 24/25 and looks so cool.  I really love the color parallels, and I do believe that the red ones look the best.  Well, maybe Orange, but I do have an affinity for that color. 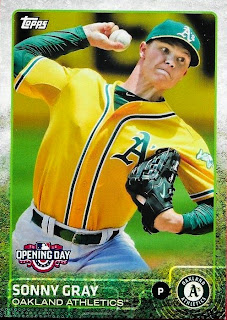 Finally, Max sent me a sleeve with several Sonny Gray cards for the PC.  Gray is a really good pitcher and the A's are floundering.  It is only a matter of time before they declare that they can't afford him, and he is sent to another team.  Maybe the Orioles will be on that list.  While, I doubt it, I can hope!

Thank you so much for the package, Max!  I am so glad we have become such good friends, and I can't wait to meet up at the National!  It is only two months away and I am starting to get super excited!
Posted by William Regenthal at 9:28 PM