Have I Ever Told You How Awesome My Mom Is? 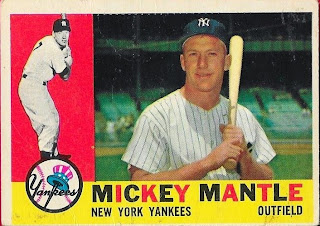 While my family was visiting my brother in Columbia, SC this weekend, my mom had mentioned how she had wanted to visit the antique shop while we were down there.  I had gone by there right when they opened at 10:00 AM because I had emailed the shop owner to tell him what I needed and I wanted to make sure that I got by there.  I always hated pulling out a bunch of cards for someone, only to have them not show up, and with us not really being sure as to what our plans were for after the Crawfish Festival, I didn't want to take the chance that he would be closed after we finished the Festval.

So, I went by there first thing Saturday, while everyone else was getting ready for the Festival.  I sorted through his '59s, discussed the DiMaggio ball, and searched for a few cards for a friend's birthday.  I had wanted to meet up with everyone so we could all get to the Crawfish Festival at 11:00, but I took 15 minutes too long.  No problem, though, because I was able to run by the grocery store and pick up a few things on my way, which ended up working out.

Anyway, I had texted Mom to tell her that I was about to finish up at the shop, and got a response from her that said "You were supposed to wait for me!  I wanted to go!"  So, I asked the shop owner and he confirmed that he closed at 5:30, so I told Mom that we could always go back, I just wouldn't be able to buy anything else.

That ended up working out, because we were done at the Crawfish Festival by 3:00 and a few of my brothers wanted to go back to Adam's place and either take naps or play Madden on XBox.  That made it so that my wife, my mom and my sister, Christy, could all check out the antique shop.

It was nice going there and not feeling like I HAD to search the cards, since I had already done so earlier in the day.  I walked around a bit and checked out the other antiques that he had for sale as Mom and my wife looked around.  Mom started noticing things that some of my brothers would like, such as an old 1950s Street & Smith magazine with a Miami Hurricanes player on the cover for one of my brothers and an antique tobacco pipe with a case for another brother.

Mom asked me to show her where all of the baseball cards were, since she is also a fan of them, so I took her to his section where he had a bunch of vintage stars in some display cases.  She, being a former Yankee fan, quickly noticed a few of the Mickey Mantle cards that were on display.  There was a 1958 Topps Mantle All Star for a good price, and also a 1958 Mantle for around $500.00.  She asked me why they were so high, and I explained that Mantle was always a good find, whether you were a Yankee fan or not.  She then asked me how many I had, and I told her that I had a couple.  Then she asked, "...well, do you have any of these?  Would you want one of them?"  My response was in the affirmative, of course, so she said "I can get you one, if you want one, it can be an early birthday present or something."  My eyes lit up, as she pretty much gave me a budget on what she would do, so I looked at a few of the cards that he had.

One of the Mantles we looked at had a pretty significant tear on it, so I didn't really want to spend that price on it, but I did see the 1960 Topps Mantle sitting in a corner of the case, at a good price, just above the budget that Mom had set.  I had the shop owner (Conrad) take the card out so I could look it over.  I also was able to talk him down on the price, since I had spent so much earlier, and since he had a sale in the bag with the other items that Mom was getting.

One catch was, however, the nice Jackie Robinson 1954 Topps card that was sitting front and center in the case... 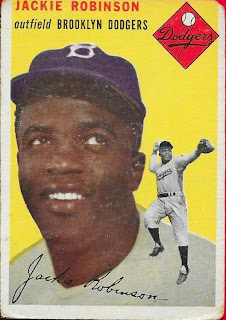 I didn't own any Jackie Robinson cards, other than the 1955 Topps card that is in my set.  I have a good friend who has one, and I always thought it was a beautiful card.  Its price was also just above Mom's budget, so I had Conrad take it out so I could compare it with the Mantle.  Mom looked over bother cards as well.  While I stood there contemplating which card to get, and enduring several eye-rolls from my 15-year old sister, Mom asked me which card I was going to choose.  I told her that it was a really tough decision, but since she was the one buying the "birthday present", she could decide for me and I would be happy either way.

So, she PUSHES me out of the way and says "Let me talk it over with the shop owner, and it will be a surprise of which card you will get."  So, we are shooed away from them while they conducted business; I walked around the shop and looked at some tobacco cards that he had in a separate case, then chatted with my wife for a bit.  Mom made a purchase, and we left the shop.

In the car, she opens her bag and pulls out BOTH cards.  She wasn't able to choose between the two of them, either.  So, according to Mom, my birthday (in September) and Christmas are already spoken for, this year!  That is fine by me!

She went through the receipt and showed me that Conrad had given her awesome deals on each of the items that she had bought.  I really think he enjoyed that we came back to the shop and he also enjoyed chatting with my mom as she bought from him.

The Jackie is equally as amazing.  That 1954 set is an awesome set, and I actually have quite a few of them.  I might be poised to begin the set sometime soon, and the Jackie pushes it forward quite a bit.  Add in the fact that a purchase I made earlier in the day even furthers the set, if I choose to build it soon, but you'll have to wait til my next post to see what I'm talking about there.

So, thank you so much, Mom, for really hooking me up with these awesome cards.  Browsing through the antique shop with you really reminded me of our times going into the old shop when I was a kid and looking at all of the cards.  I felt like a little kid, again!  Except that Conrad doesn't look like Rafael Palmeiro.