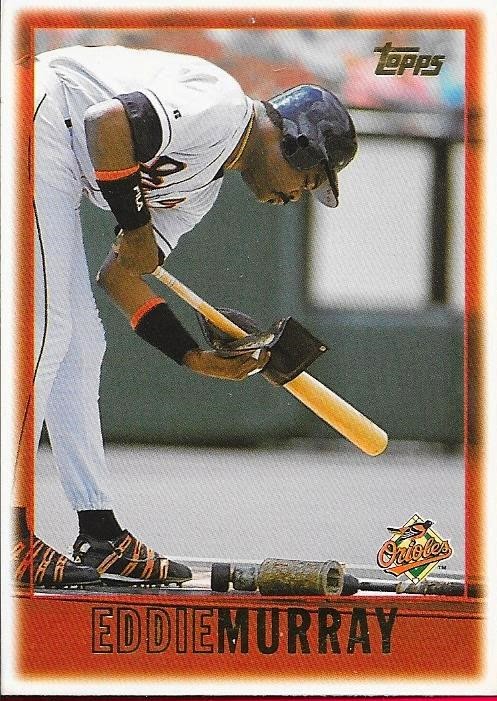 I got a nice package in the mail the other day from fellow blogger and friend, Matthew, that had a few random Orioles cards and a few other random cards of other stars.  Matthew has been missing from the blogs recently due to his moving into a new house.  I was really happy to get the package, but I was even happier when I realized that one of the random Orioles cards was this 1997 Topps Eddie Murray.

This card is significan in a couple of ways.  First, I am passively working on the 1997 set (and I need to get my needs list posted) and I actually needed this one.

Thanks for the cards, Matthew.

Since I ranted the other day on XM radio hosts, I'd like to take a minute to do it again (sorry, Matthew).  I love my XM radio and I've had it for 7 years now.  Before this year, I never turned off of the baseball channel because of an on air personality.  Recently they have been using one of their other channel's sports commentators - Christopher "Mad Dog" Russo - to host an hour-long show on MLB Network.  He made me so mad one day with a throwaway comment that I switched the channel to Pearl Jam Radio immediately.

His statement was about the Hall of Fame and he commented that in his mind, Eddie Murray was not a Hall of Famer.  No reason given, but he says this about Murray.  I'm not too terribly worried, because the guy had made other statements about the Hall of Fame that made me glad he didn't have a vote (he just came off as being terribly uninformed about baseball's most hallowed shrine to be having his own show about baseball).  Murray is one of four former players to have 500+ home runs and 3,000+ hits (three of them are in the Hall and one is Rafael Palmeiro) and was a model of consistency for his 21 seasons played.  He was a first ballot Hall of Famer, so this Russo guy's assertion that Murray wasn't a Hall of Famer must not have been shared by the folks who actually KNOW about the sport.  Murray was voted in with 85% of the vote, so it's not like there was any question about his credentials.

Stick to football and yelling into the microphone, Mr. Russo.  You clearly know nothing about baseball.
Posted by William Regenthal at 5:47 PM