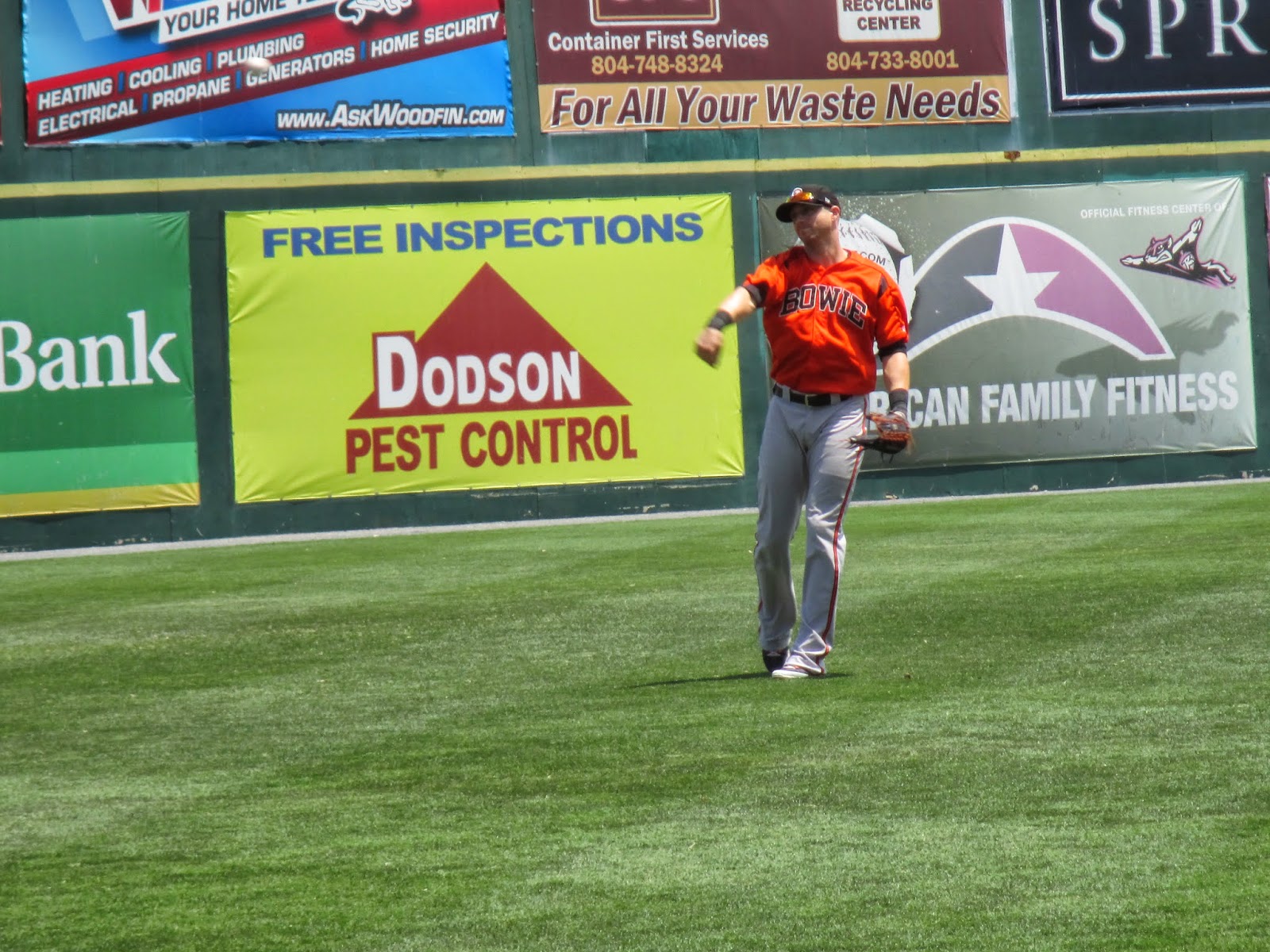 I met up with my good friend, Ryan (from the blog O No Another Orioles Blog), and caught two Bowie Baysox games in Richmond this past weekend.  The highlight of the trip was that we were able to watch Nolan Reimold play for Bowie in the final two games of his rehab assignment.

Bowie took Saturday's game, 3-0 behind a stellar pitching performance by Tyler Wilson.  Wilson went 7 innings, allowing only 2 hits, one walk and striking out 9.  He was awesome.  The win put Wilson at 10-5 on the year with a 3.72 ERA.  He was aided by Nolan who went 2-4 with a SB, Christian Walker who went 3-4 and Dariel Alvarez who went 2-4.  Walker and Alvarez appear to be legit prospects and should be in Baltimore very soon.

After the game, Ryan and I met Nolan as he was exiting the stadium.  I'm sure I came off a little Kathy Bates-like (I'm your number one fan) when I talked to Nolan.  I couldn't help it.  I got nervous and ended up running off at the mouth.  I hope Nolan understood that I was just excited and didn't want to come off looking like some crazed fan.

The second game wasn't as eventful as the first. The Baysox lost 4-3 with Nolan going 0 for 4, lowering his AA average to .314.  Walker and Alvarez each went 0-4 as well.  The game was further marred by a dud of an outing by Orioles pitching prospect, Eduardo Rodriguez.  I'm sure folks have seen him throw better, but Ryan and I picked a bad time to watch him as he lasted only 3.2 innings, allowing 4 runs (3 earned) with 4 walks and 3 strikeouts.  Rodriguez looked like a typical Baltimore pitcher, throwing a ton of pitches early and walking a lot of guys.  I don't know what it is, but the Orioles need to work on better pitching development and finding guys who don't walk a ton of batters. 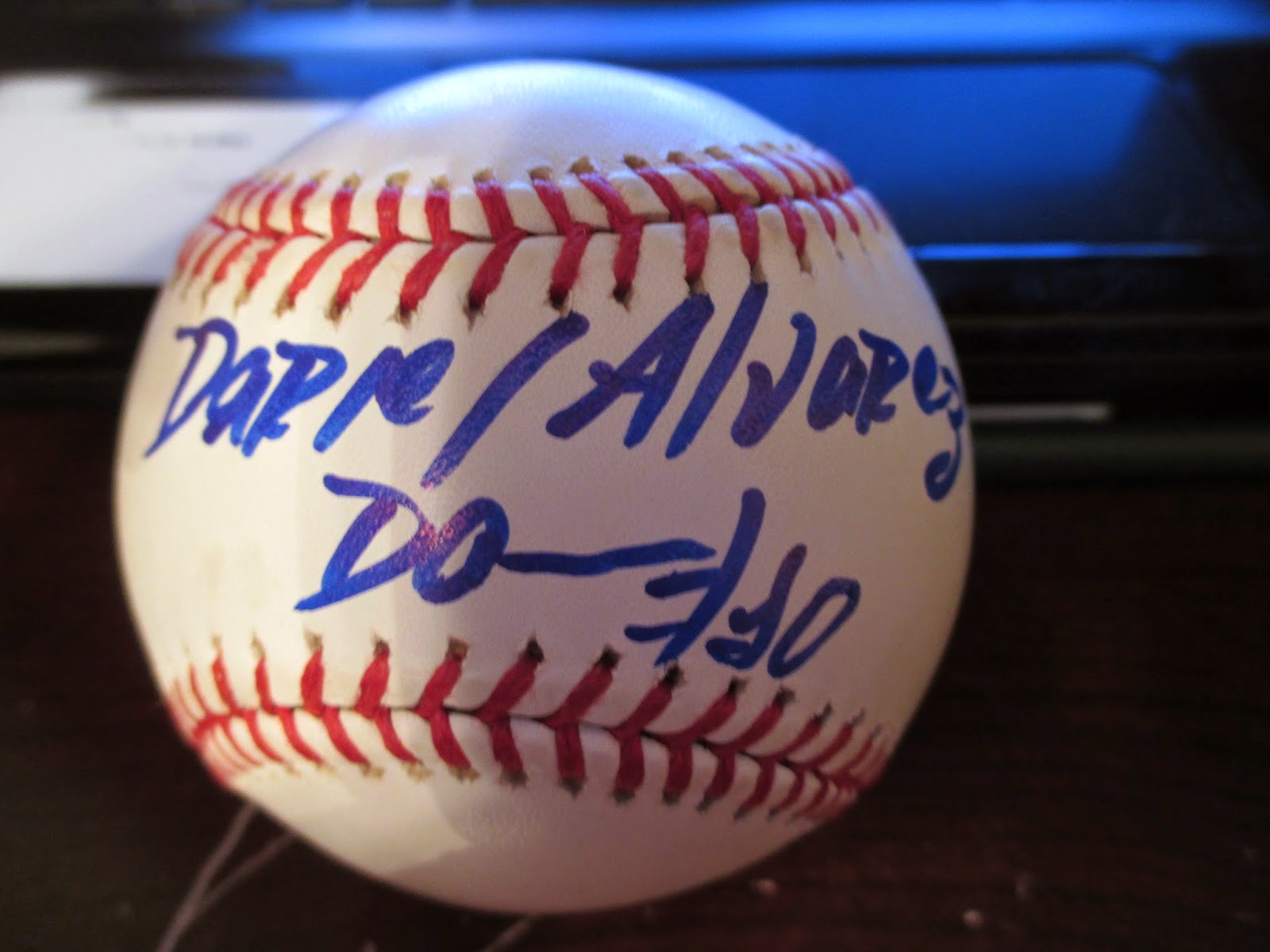 Before Saturday's game, I got autographs from Dariel Alvarez (above).  Can anyone help me with his inscription?  I can't make heads or tails of it.  Below is a signed ball by Christian Walker.  I had only one OMLB ball, which I got Alvarez with and I had a ton of synthetic cover balls that I needed to find a use for, so the Walker ball ends up being a bit of an experiment as well.  I used Ryan's Staedtler pen on both balls.  Let's see if this pen, which I have heard rave reviews of, can hold a signature on these synthetic leather balls.  If they work, I may have a use for these balls yet (and I will need to buy my own pen). 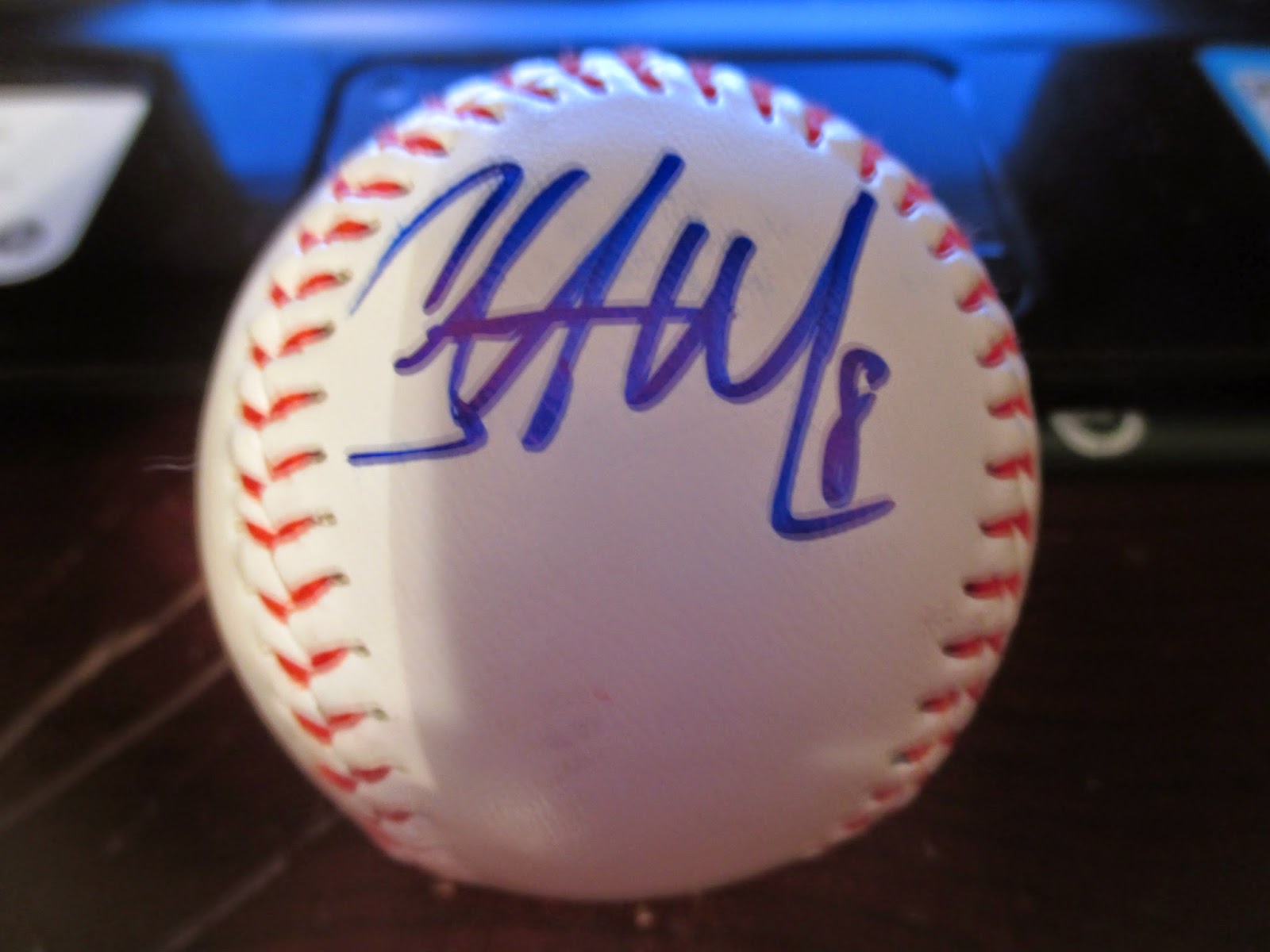 Finally, I treat you all with an amateur video I shot of one of Nolan's hits from Saturday's game.  I hope you enjoy.

I had a really good time at the game with Ryan, who I hadn't seen in over a year (wow).  I didn't mind the concrete monstrosity that was "The Diamond" (the RIchmond field).  It was very easy for us to get autographs, as we could stand by the wall right by the field, reminiscent of Kinston's Grainger Stadium.  The experience was fine and the hot dogs were really good.  The aesthetics of the park get a -1 out of 10, but other than that, I have no complaints whatsoever, so I would have to rate my overall experience as very high.  I miss being able to catch minor league games, so I think I need to go out and catch some more like I had been back in 2010 and 2011.  We'll see how that goes.
Posted by William Regenthal at 11:04 PM