Manny Machado Does Worst Thing Ever 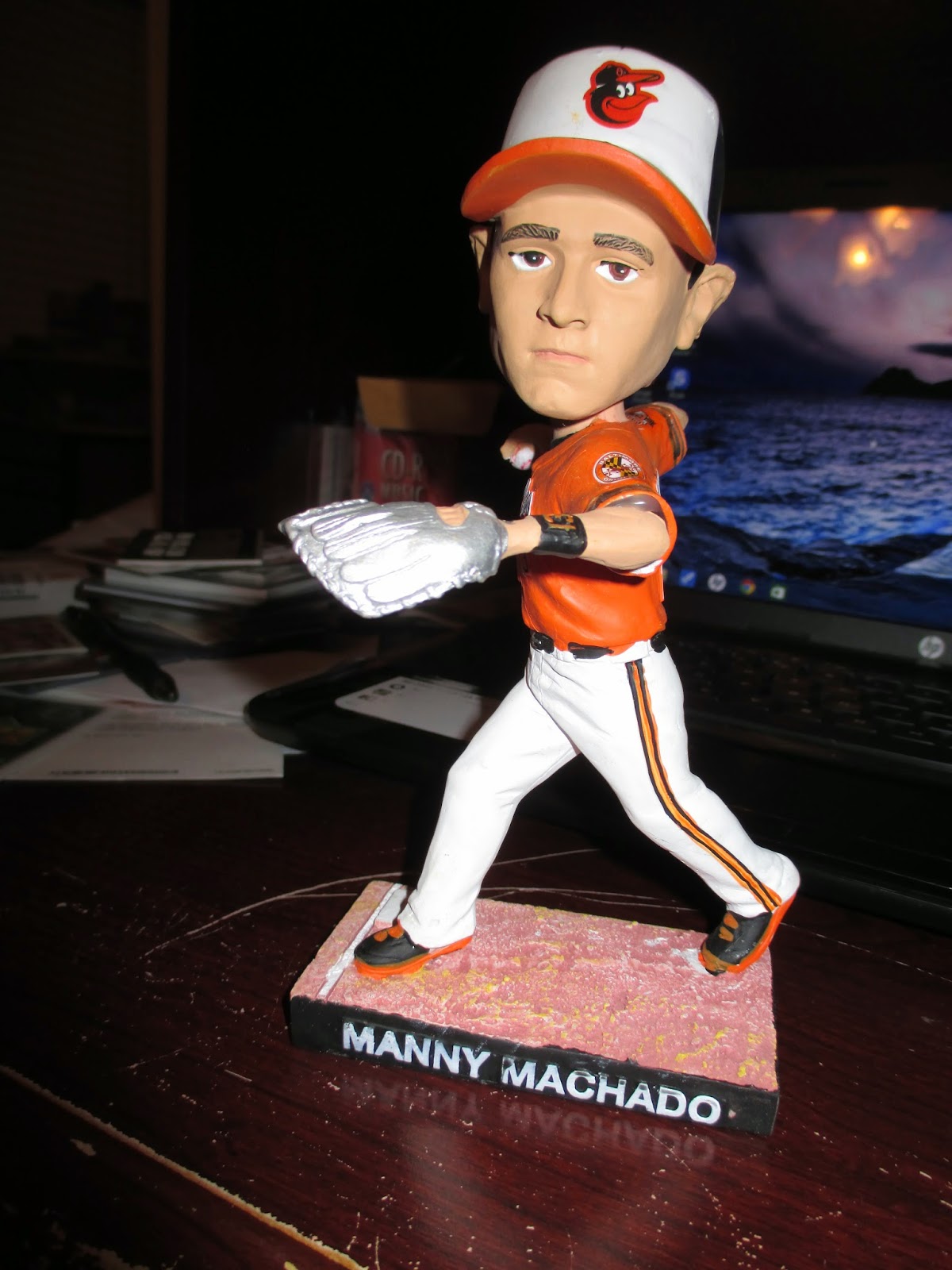 I preface this blog post by saying that this is my blog and although I rarely give in depth opinion pieces, I felt the need to respond to a lot of criticism that the Orioles third baseman, Manny Machado has received recently.  If I offend, I apologize, but I feel like this is my forum and I should be able to say my piece.  Thanks.

Wow, what a strange weekend.  I'm still coming off of my high from experiencing my mom's first MLB game.  Now, all I hear on XM radio, all I read in the comments section of Roch Kubatko's blog, and all I hear from folks on Instagram is stuff about how Manny Machado is seemingly the worst person ever in the world for hurling his bat during Sunday's game against the A's.

It all began on Friday when Manny went off on Josh Donaldson when Donaldson (in Manny's mind) applied a harder tag than necessary which caused Manny to lose his balance and fall over.

It continued on Saturday when Manny struck out and tossed his helmet in disgust.

It boiled over on Sunday when Manny hit A's catcher Derek Norris in the helmet twice on the backswing, causing Norris to have to leave the game causing A's pitcher Fernando Abad to throw inside to Manny's surgically repaired knee twice.  Apparently, Manny violated one of the thousands of unwritten rules of baseball by not checking to see if Norris was ok.  The umpire did not issue a warning to Abad at the first inside pitch missed Manny's and when the second pitch came inside to Manny, signaling that Abad was, in fact, intentionally throwing at Manny, Manny swung late and flung his bat down the third base line, in the general vicinity of A's third baseman, Alberto Callaspo.

We have all of that down?  Another note is that Manny is 21 years old and has played one full season in the majors.

Now, I have heard over the last few days, XM commentators completely flame Manny for his bat toss and make it like he did the "Worst Thing Ever" and make quotes like "there is no place in baseball for this; he should receive a hefty suspension; this is assault; etc etc etc."  I read in comments from actual Orioles fans (or people who say they are Orioles fans) on Roch's blog about how they always knew Manny was a bad guy, that his friendship with A-Rod us manifesting itself, that he is a whiny brat, etc, etc, etc.  I am also seeing posts and comments on Instagram from kids who are calling Manny an immature punk.

What my perception of all of this is, is that a few acts of immaturity from a 21-year old kid have suddenly sent his stock crashing and severely damaged his reputation.  Why?  He made a mistake.  He apologized twice on MASN yesterday.  His manager spoke today about how, with his swing, he has actually hit catchers about 7 times this season alone, not on purpose, but due to the mechanics of his swing.  According to Buck Showalter, via Roch's blog, was that Manny knew that if he apologized to Norris, the A's would find it insincere due to the events that occurred on Friday.  He was already in a lose-lose situation.  Then come the intentional "inside pitches" that anyone and everyone could tell were meant to bean him.  What is forgotten is that another of the millions of unwritten rules is that if you try to intentionally bean someone one once and miss, you don't try again in the same at bat.

What Manny did was wrong.  He should have apologized to Norris after hitting him.  He should not have flung his bat down the third base line.  However, the talking heads on XM (especially Jim Bowden, a former GM of the Reds and Nationals who, himself, has made his share of mistakes) and the sanctimonious [folks] on ESPN need to lighten up.  Assault?  Really?  Pitchers can throw a ball at close to 100 miles an hour and many times over the past 100 years has a pitcher "head hunted" and thrown at batters' heads.  Sometimes, they've been hit.  The Reds Johnny Cueto tried to stomp a guy's head with cleats on.  Manny flung a bat down the third base line, a distance of approximately 90 feet and the third baseman was able to watch from near shortstop.  I'm not condoning his actions because, yes, they were childish and wrong, but come on.  Get over yourselves.  All this has been is fodder for these media outlets to get some clicks or views or whatever.  I don't get paid for clicks or views, I do this blog for free, so before I'm accused to playing the same game, I am not.

The media has played this off like it is the first time a player of Machado's stature has ever made a mistake. That he is suddenly some kind of villain, when, in reality, he is just a kid who, if not playing baseball at the moment, would probably be in college.  You can't tell me you never did anything dumb, or immature when you were 21.  The kids on Instagram calling him immature, hey, at 12-14 years old, you guys sure have a lot of room to talk.  I've seen how some of you interact with others and it makes me think of the old saying about pots and kettles.

So, I close this rant by saying that I hope Manny has learned his lesson.  While disappointed in him, I am more disappointed in seeing how quick folks are to bash someone and the joy that is taken in seeing someone fall from grace.  It disgusts me to see how quick some people are to jump on someone for their mistakes and conveniently forget their own shortcomings.  It's time to let it go and move on.  Manny isn't a bad person, he's just a young kid who is still growing and learning how to handle himself.  Yes, he handled himself very poorly this time around, but I hope that he learns from this and moves on.

Thanks for reading this.  I feel better now, and can move on.  I know the media won't until they run the story into the ground, but hey, I have the choice to ignore it.

Oh yeah, the picture above is the Manny Machado bobblehead that I got on Saturday.  Cool, isn't it?  I can't wait to get back to my normal blog routine instead of rant pieces like this one.
Posted by William Regenthal at 6:27 PM