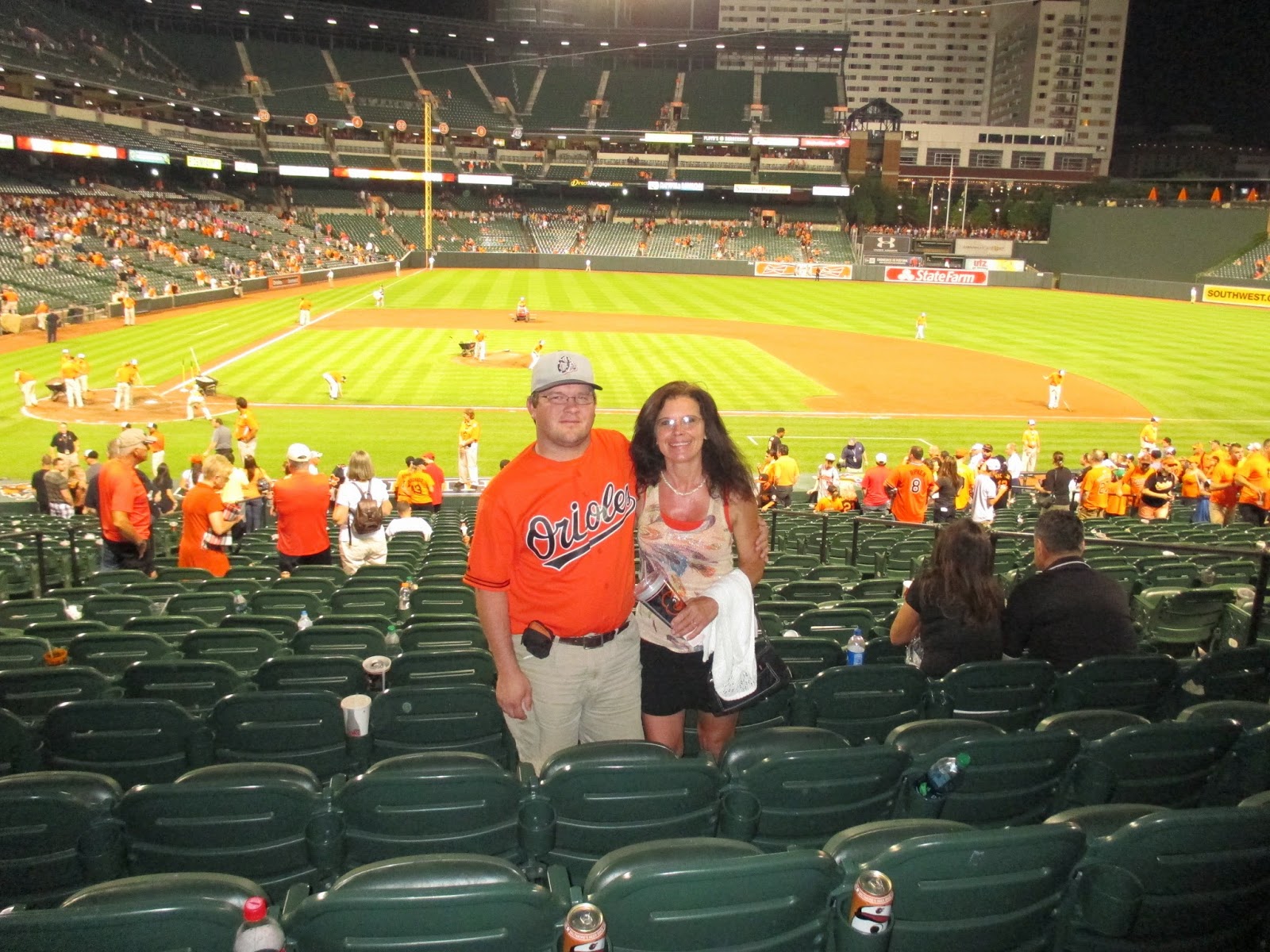 My mom is having one of those "milestone" birthdays in December (I won't say which, since it isn't polite to give out a lady's age) and I wanted to do something really special.  She has always mentioned when I have taken friends and family members to baseball games how she really would enjoy going.  Also, if you read this blog on a regular basis, you'd know that my mom is the one person who really cultivated my love for baseball, my love for collecting, and has pushed me with my writing of this blog.  I figured that taking her to a MLB game would be the perfect "present" for her upcoming birthday. 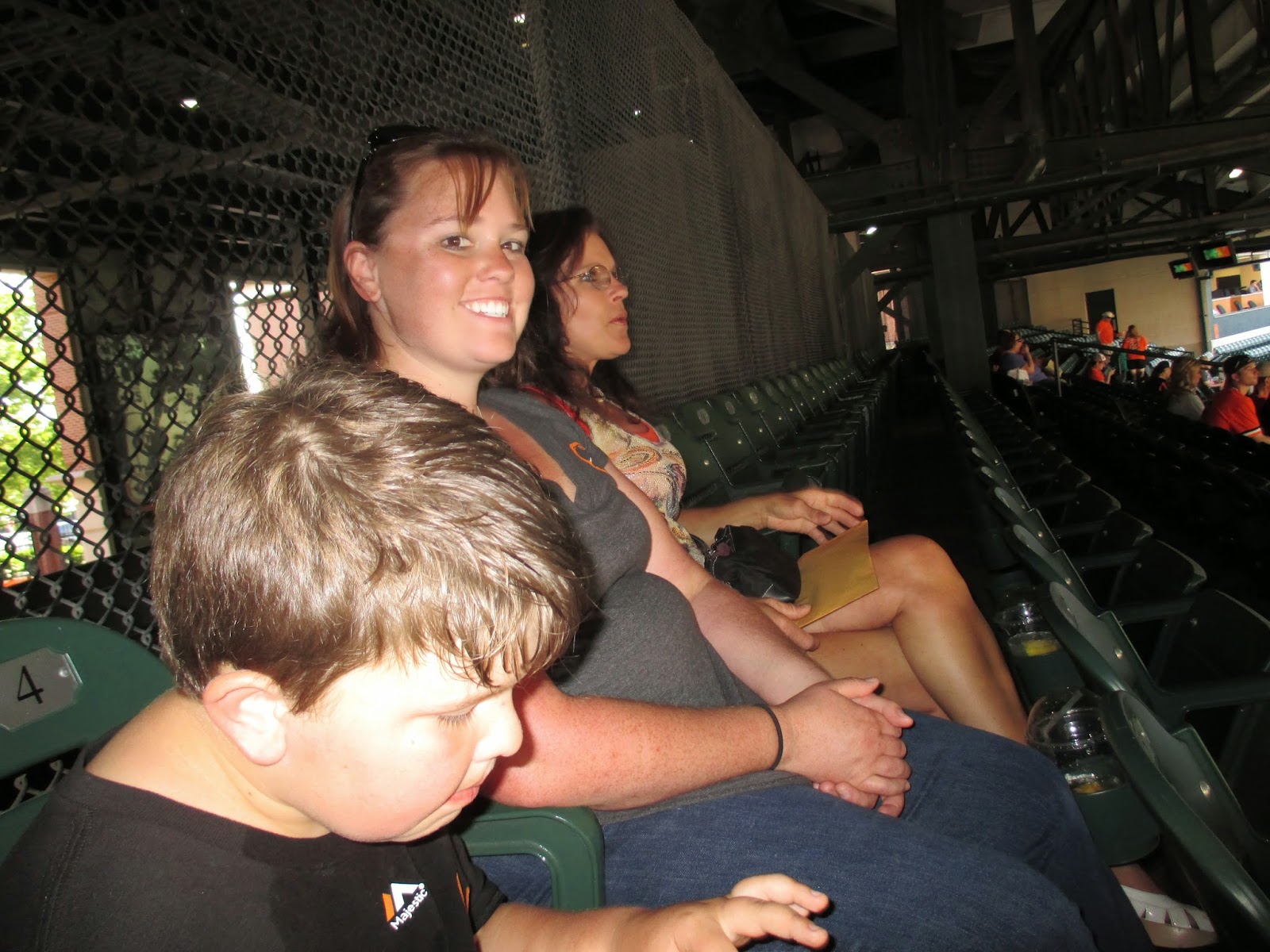 We had really good seats to see the O's take on the A's in a battle of the vowels at Oriole Park at Camden Yards.  We were under the deck in section 23, between home and first base.  We had waited in line from 2:30 until the gates opened at 5:00 for the 7:05 game because we were there for the Manny Machado bobblehead promotion.  I'm glad we got there so early because we were one of the first in line at the gates and got our bobbleheads with no problems.

We killed time in line by talking to a nice lady who knew her baseball.  That made the time go by really fast and Mom felt like she learned quite a bit.  One of the most fun parts of the trip was our time talking baseball back and forth.  Mom had some awesome questions that she was asking me, such as who I thought was the most overrated Hall of Famer, who was my favorite Hall of Famer, who was the most overrated of todays players, stuff about baseball rules, and other things like that. It was a lot of fun dispensing some knowledge to someone who really wanted to know, and not someone like my wife, who gets a gazed-over look in her eyes when I talk baseball.

Above, you can see Mom, my wife and my son taking in the pre-game warmups.  Mom didn't move from her seat once we sat, she was so excited to be at the park. 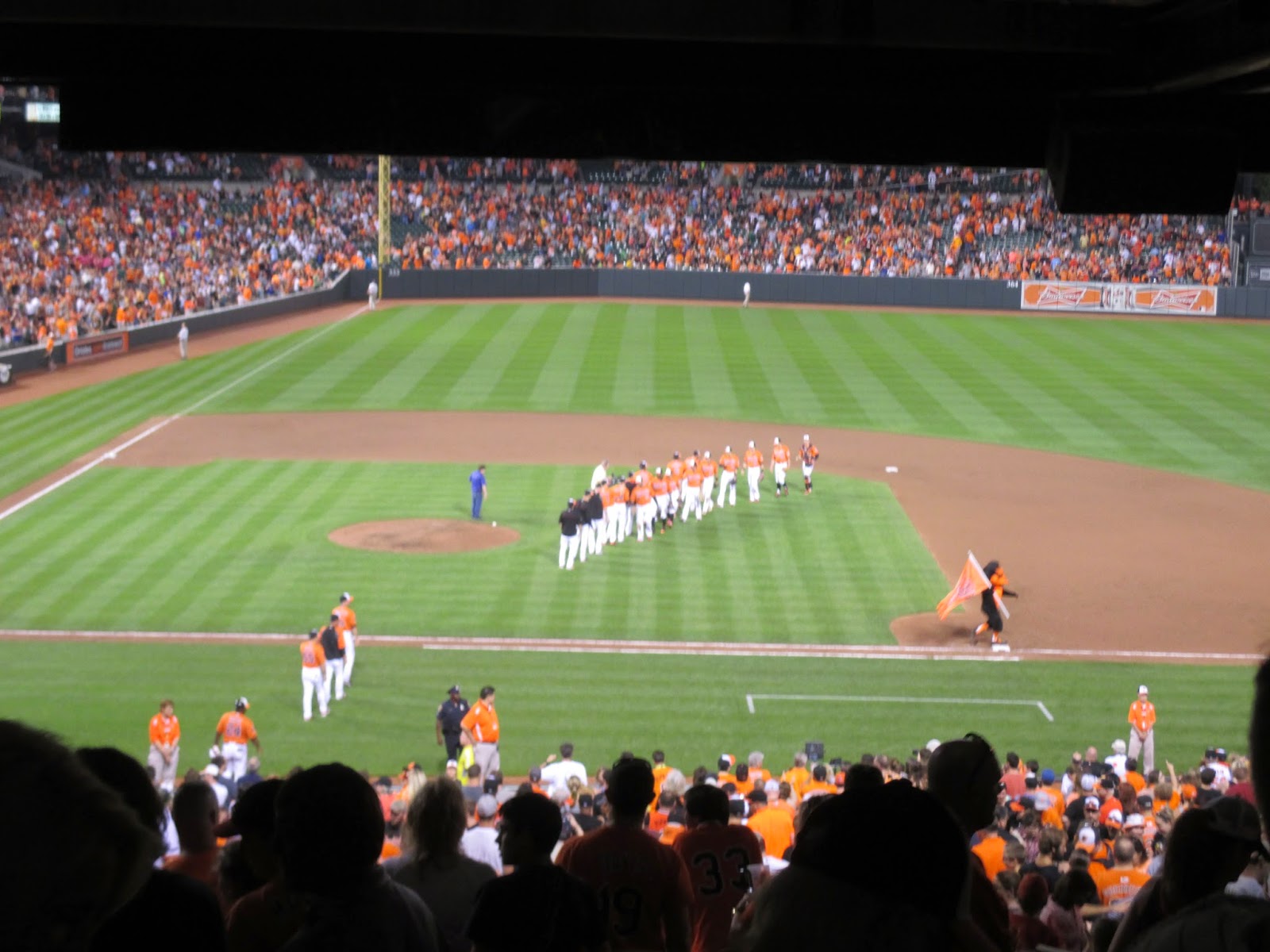 Thankfully, we went to the Saturday game and saw the O's win, as opposed to the travesty that happened yesterday, with Ubaldo Jimenez stinking the place up (again) and Manny Machado acting more like Manny Ramirez. 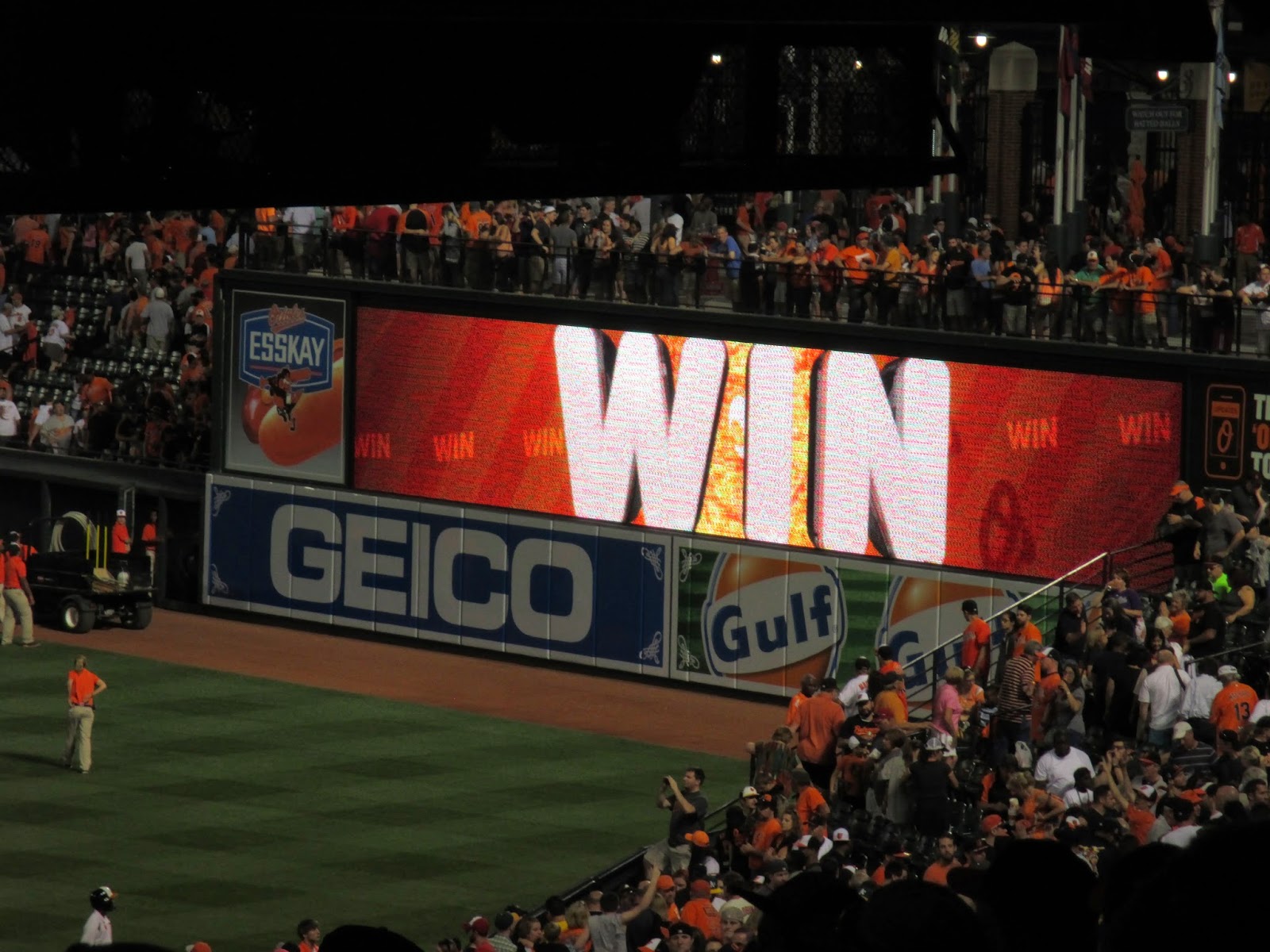 We got to see the Orioles win 6-3; Kevin Gausman got his first Major League win as a starter; Adam Jones and David Lough homered.  Coco Crisp also homered for the A's.  We got to see Jim Johnson pitch for the A's.  I liked Johnson when he was an Oriole and it was sad for me to see him booed by the home fans when he came out.  I clapped for him because I remembered the good years he put in as closer.  He has had a bad year and it manifested itself Saturday when he gave up a two-run homer to Lough. 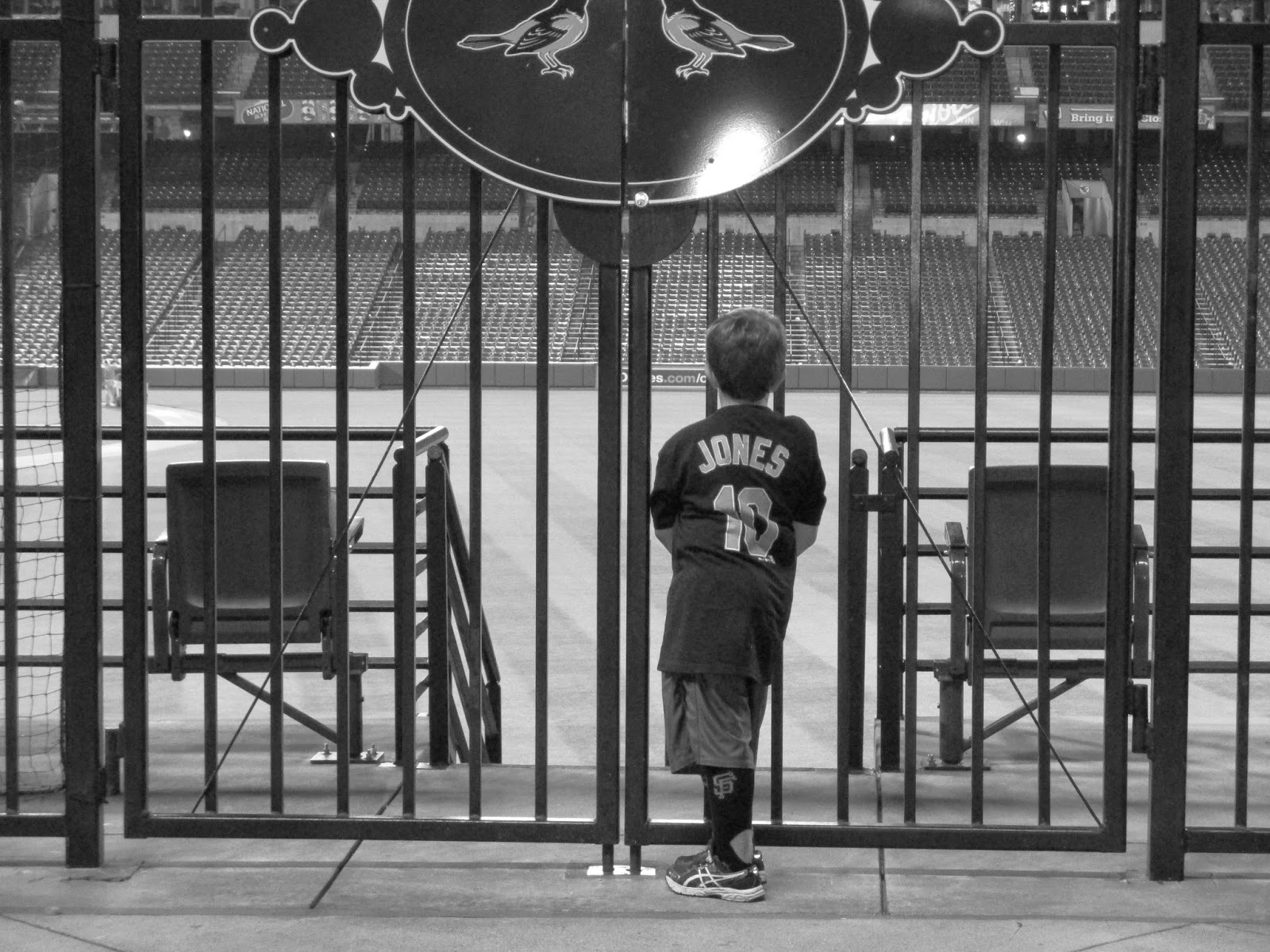 My son, Chris, also enjoyed the game.  Now that he has played a great deal of baseball, himself, he was able to really follow the game. I thought this black & white shot of him looking out at the field after the game was a great shot.  Also, if you look closely, you'll see his San Francisco Giants socks that Mom bought him.  I have never seen any kid enjoy a pair of socks as he has enjoyed those. They looked really awesome on him. 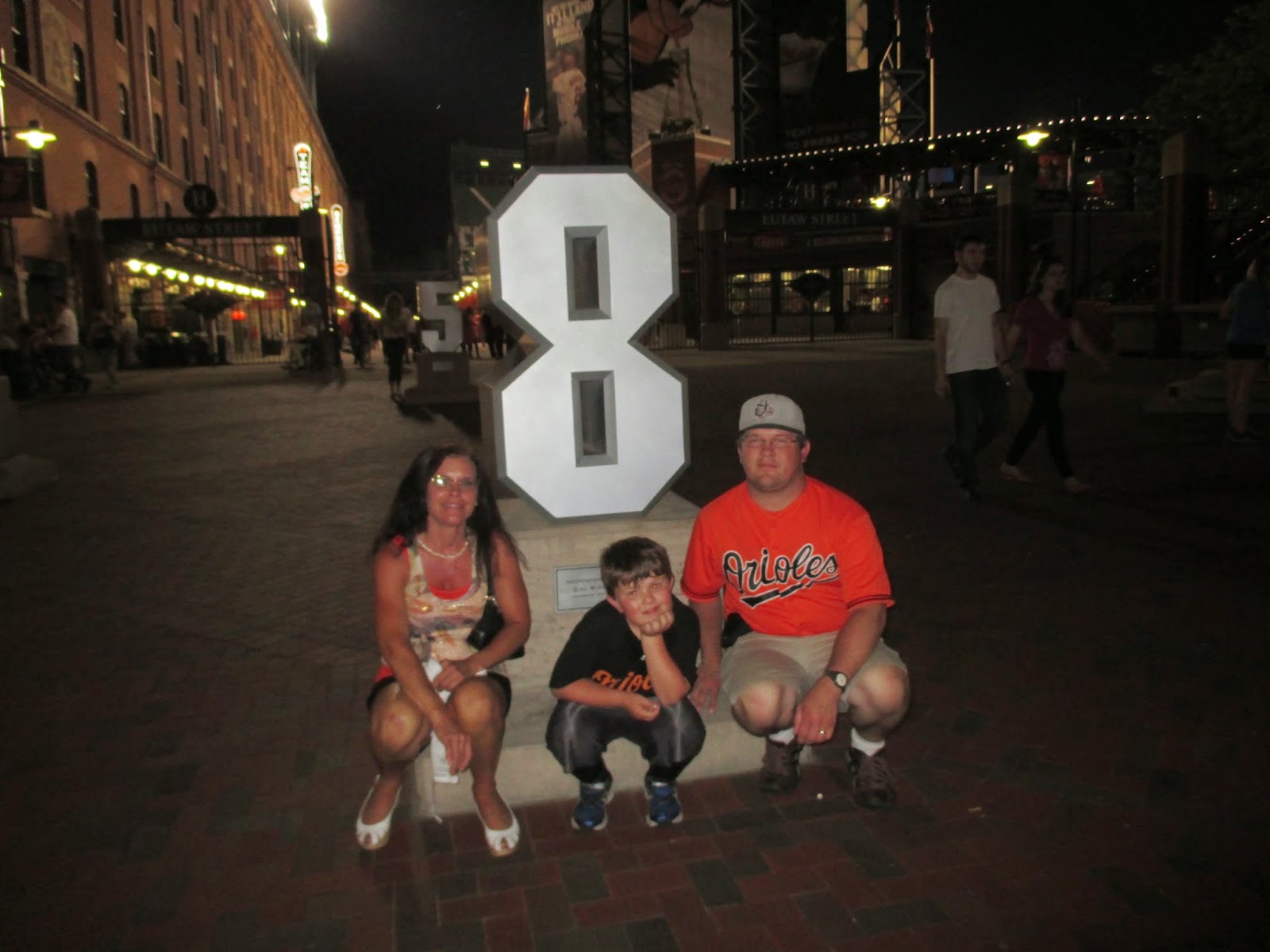 So, I am happy to say that my mom had a great time at the game and really enjoyed Baltimore.  I know this is true, because she texted me today and told me she was so impressed with the city that she emailed the mayor of Baltimore.

She also told me that for the first time in about 20 years or so, she bought and opened a few packs of baseball cards for herself.  I think I may have awoken a monster.  I sincerely believe that she is going to get back into collecting.  Wouldn't that be awesome?  I wonder if she'd start a blog... wishful thinking perhaps.

Mom's key phrase this whole weekend was that she wanted to make some memories and I know this truly was the case.  I was so happy to be able to give her the gift of taking her to her first MLB game.  She has said that she might want to do this again next year and she is also really interested in a trip to Cooperstown.  I think I can make that happen.
Posted by William Regenthal at 8:37 PM