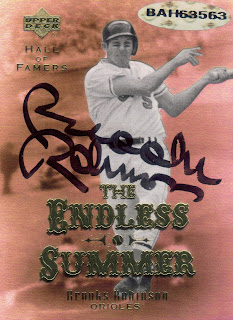 My in-laws actually read my blog on a regular basis, from what I'm told.  So, when I opened one of my Christmas presents and saw it was the above Brooks Robinson signed 2001 Upper Deck Endless Summer card, I knew they'd get to see it again.  The card comes with a full COA from Upper Deck, which I haven't seen for a card before.  Its pretty cool, actually.  I kind of wish they had affixed their COA sticker on the back of the card, though.  Oh well.

According to the COA, the card was signed in front of an Upper Deck representative in Rock Hill, South Carolina in 2001.  My question is, since I was living in Charlotte at that time, how did I miss that Brooks would be in nearby Rock Hill?  Oh, that's right, I was a broke college student at the time.  That might be why I missed it.  That would have been cool, though, to meet Brooks as he was in the area.  Well, I got my chance 8 years later.

Anyway, I love this card and I'm glad my in-laws thought well enough of me to get it for me for Christmas.  I'm surprised that my mother-in-law didn't get me a signed Yankees card, since she likes to pick on me being an Orioles fan.  Her dad (my wife's grandpa) was nice enough to call me and gloat about the Yankees signing Brian Roberts.  Thanks, Pop, I appreciate that.

So, thanks to my in-laws for this awesome signed Brooks Robinson card.  I really love it and it will be added to my Brooks PC.
Posted by William Regenthal at 10:31 PM