My First of Two Secret Santas

I signed up for two Secret Santas this year, the first time I have done so through the blogs.  The first one I have received is from the blog "Crackin Wax."  Topher, from that blog, did his Secret Santa through the Elfster app.  It made it pretty easy to organize the endeavor and track when your items were on their way.  In my package, I received a stack of 2013 Topps Orioles cards (I believe it is pretty much the team set) along with a few items that I scanned for the blog.  I got this really cool mini pennant of the O's that I will hang in the man cave with my other O's pennants. 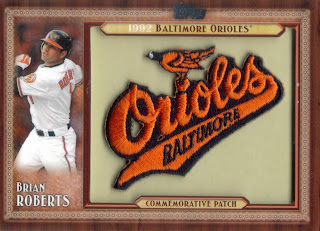 I got this 2011 Topps manufactured patch of Brian Roberts, which I didn't have in my Roberts PC.  Coincidentally, this card and another that I received in a later Christmas present will be the last Roberts cards that I will add to that PC.  Since he was traitorous and joined the Yankees, I will be suspending my Roberts PC searching until a later date (probably when he retires).  We'll see.  Nonetheless, I do appreciate the Roberts pickups this Secret Santa and the friend who (Weston) sent a Roberts in the Christmas package. 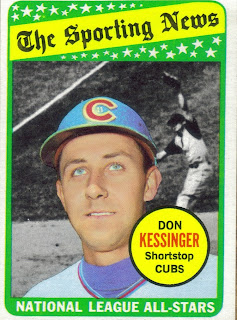 Finally, I got a 1969 Topps for my set that I'm working on.  I had hoped I'd have chipped away more of the set than I have but I've been busy working on other things.  I'm glad this secret Santa took the time to look at my needs list and knocked a '69 off.

So, thanks Secret Santa, whomever you are!  Also, thanks 'Topher for organizing the Secret Santa.  I'll definitely sign up again next year!
Posted by William Regenthal at 5:31 PM