Christmas and More Birthday From Michael 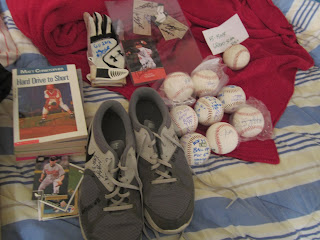 I got two boxes in the mail recently from my good friend, Michael.  He had to get me some stuff he promised for my birthday, a few Christmas items and a couple pieces of memorabilia that I bought off of him.

In the box, he included a ton of his own game used baseballs from various games which he has played, along with some game worn shoes.  He also sent some old batting gloves he wasn't using anymore.

He included a stack of books, including some brand new Goosebumps books for my son, Chris, which Chris loves.  We've been working hard on getting him interested in reading, and he really has taken a liking to Goosebumps.  Thanks for these, Michael!

I purchased from him, a couple signed baseballs by some Orioles, Tsuyoshi Wada and Bud Norris.  The Wada was an unfortunate purchase on my part, since I got him back in August, thinking he would be serviceable for the O's, but he never made a start.  Norris, on the other hand, should be a decent pickup for the birds.  We'll see.

The biggest piece is a grand slam ball by Brian Roberts that Michael caught at the August 23, 2013 game against the A's.  Roberts belted a Grand Slam off of the A's Dan Straily and the ball happened to bounce onto the flag court, then out into the mezzanine where Michael was standing.  I had to trade him some pretty good stuff to get it, but I have it now and it is pretty sweet.  The final addition to my Roberts collection (until he retires and is inducted into the Orioles hall of fame).

Thanks for all of the cool stuff, Michael, I really appreciate it!  See you at Fan Fest!
Posted by William Regenthal at 7:40 PM