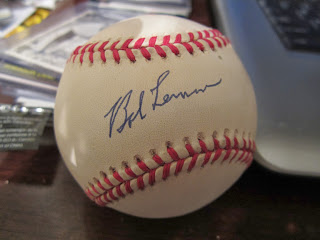 I had one of the most productive visits to a Raleigh Card show in recent memory when I met my good friend, Scott, on Saturday.  We met up at 9AM and went inside and went berserk on the tables until we couldn't take it anymore (and we got hungry).

I wasn't going to buy any baseballs, being this close to Christmas, but when I saw the above Bob Lemon that I needed and heard the price the lady was charging, I jumped all over it.  She wanted $60 but said she would do $50, plus is it JSA, so I took the deal.

Lemon is my 96th Hall of Famer.  The ball is a Bobby Brown OAL ball.