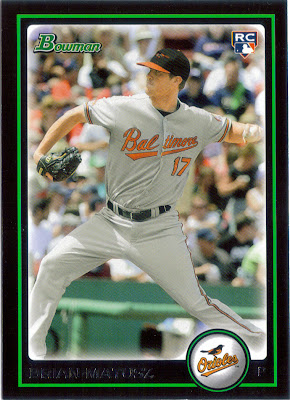 I was going to do a post tonight about the awesome trade I completed at the card show with fellow blogger Ryan from "O" No Another Oriole Blog, but I'm so mad right now at a player who is supposed to be a key component of the Orioles' future rotation, one Brian Matusz.

He had a wart removed from the index finger on his pitching hand right as spring training was getting under way. A very questionable decision that caused him to miss a little bit of time.

Then, he strained an intercostal muscle as spring training went along and missed the first month of the season.

Finally, he is back from the disabled list... Or at least I think he's back. He showed up. Well, maybe he hasn't shown up... Over the course of the last few starts, Matusz has looked winded as the second inning starts. Also, his velocity has fallen off the table. Many fellow O's fans are starting to question his conditioning. Did he let himself get out of shape? Is his arm hurt and he's not telling anyone? Who knows.

All I know is, he allowed 8 runs in 3.1 innings tonight to the Pujols-less Cardinals and doesn't look anything like the pitcher that closed last season with 6 straight victories. He's looking more like a shell of the phenom pitcher all O's fans expected to flirt with around 15 wins this season.

I don't usually use my blog to rant about a player, but I honestly believe it is time to option Matusz to AAA Norfolk and let him figure out what's wrong. I'm really hoping it is something that can be corrected instead of yet another O's pitching prospect flaming out (a la Matt Riley, Adam Loewen, etc.).

See you in Norfolk, Brian. Don't come back til you are 100% healthy and have figured out what's wrong. The O's need you big time.

**UPDATE: The Orioles optioned Brian Matusz to AAA Norfolk after tonight's loss to the Cardinals.
Posted by William Regenthal at 8:21 PM

As much as I hate to say it, I think you're right. Matusz could use some time in the Minors to get his act together.