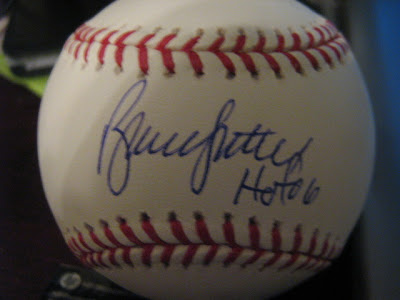 I was able to stretch out my tax return into 3 more baseballs. All Hall of Famers, of course. As it turns out, (which I didn't notice until Drew pointed it out) all 3 spent a good chunk of time as Cardinals.

The first baseball that I will show off is this Bruce Sutter signed baseball. Sutter is my 34th Hall of Famer. He played in the majors from 1976 to 1986 and 1988 for the Cubs, Cardinals and Braves. He had a career record of 68-71 with an ERA of 2.83 and 861 strikeouts. He was a reliever who apparently invented the split finger fastball (a pitch that Sutter says shredded his pitching arm). He led the league in saves 5 times and retired with exactly 300.