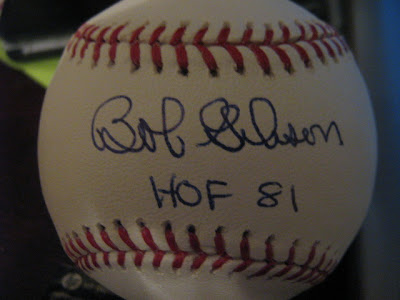 My 36th Hall of Fame signed baseball is of one of (in my mind) the greatest pitchers to ever toe the rubber, Bob Gibson. I have been wanting his autograph for a good while now and I finally got it (along with the aforementioned Sutter and Schoendienst baseballs) at a ridiculously low price. It is JSA authenticated, so I don't have to sweat over the signature. I think it looks amazing.

Gibson played in the majors from 1959 to 1975 (all for the Cardinals). He was the Cy Young Award winner in 1968 and 1970. His 1968 season was so good, not only did he win the Cy Young, but he was also the NL MVP and in the following season, the mound was lowered due to his sheer dominance over the league.

I thought he had to have led the league in those categories art least more than once. Wow. He also only had 5 seasons with 20 or more wins. None of this matters. Ask a Hall of Famer who played in that era and they'll tell you that Gibson was probably the scariest pitcher that they could have faced.

I don't think any of this should cheapen Gibson's legacy at all. In my mind, he is one of the legendary pitchers of all time. If I wanted to pick a pitcher to start game 7 of the World Series, Gibson would be right at the top of my list.
Posted by William Regenthal at 2:55 PM