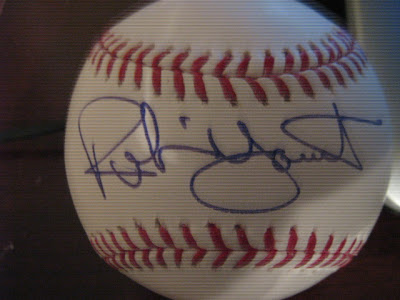 I picked up some cool stuff at this weekend's card show in Raleigh. The first of which is my 40th Hall of Fame baseball.

I have wanted to try TTM to Robin Yount for a while, but it looks like he doesn't sign a whole lot. I made a trade to a dealer who had some awesome autos and got a good deal on this ball and another that will be shown in a later post (they always seem to come in twos don't they?).

As you can see, the Yount sig is beautiful. I would have liked a HOF inscription, but who can complain, really? I did meet his son Dustin when he played for the Chattanooga Lookouts, so there's a six-degrees of Kevin Bacon going on there.

What do you guys think of the ball? I think it looks pretty amazing. I'm glad I was able to knock him off my list, that's for sure.
Posted by William Regenthal at 9:11 PM

LOL @the 6 degrees of Kevin Bacon ahahahahahhaa. Anyways, sweet pickup man, Younts got a beautiful sig and in my opinion you got a steal!