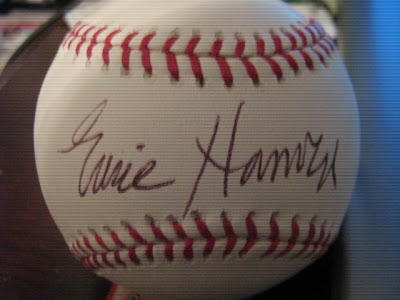 I was able to get my hands on another Hall of Fame announcer's signed baseball this weekend at the Raleigh card show. I have wanted an Ernie Harwell ball for the past couple of years; ever since I heard an interview with him on my XM radio. I thought it was awesome that he had called games almost 70 years ago and was around to relate the stories to a younger generation.

Sadly, Harwell died last year due to cancer and his voice has been silenced forever. I think Harwell is one of the iconic voices of baseball along with Red Barber, Jack Buck, Vin Scully, Bob Uecker, Harry Caray, etc. I want to try to get autographed baseballs of some of the legendary announcers. I have Phil Rizzuto, Bob Uecker and Harwell now.

Ernie Harwell makes my 41st Hall of Fame autographed baseball. I hope to keep them coming.
Posted by William Regenthal at 5:16 PM