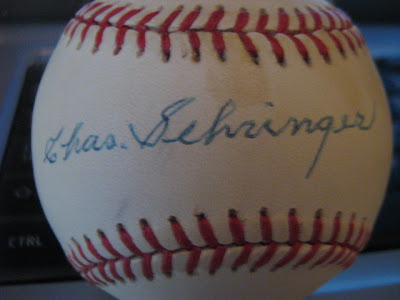 I got really lucky on an OLD Hall of Famer recently when I was able to get this Charlie Gehringer signed ball on Saturday. It was an auction that I won that ended up costing me $120. I had some tax return money left that my wife allowed me to use on anything I wanted, so I wanted to get an auto of an older Hall of Famer.

Gehringer was a solid player in his career that spanned from 1924 to 1942, playing the entire time for the Detroit Tigers. Gehringer was a very good hitter, hitting above .300 in 13 full seasons and .330 or above in 6 seasons. He was also the 1937 AL MVP.

The ball is PSA/DNA authenticated and I verified the code before I made the purchase. I am really happy with this baseball and it looks awesome in my china cabinet. I also was happy to get Gehringer because he was a coach for Virgil Trucks, so I can play six degrees of Kevin Bacon with those two, haha.

Gehringer is my 30th Hall of Fame autograph on a baseball.
Posted by William Regenthal at 6:00 PM

We Were On A Case Break said...