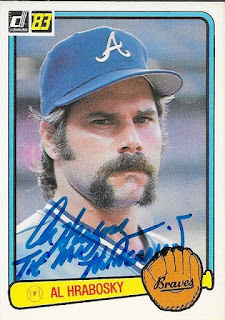 I received another TTM success recently when I got this 1983 Donruss signed by former Major Leaguer, Al Hrabosky.  I sent to him on January 16, 2016 and got the card back on February 6, 2016.  Not a bad turn around.

I originally got the card in one of the many huge cards boxes that I picked up after Christmas from my good friend, and fellow blogger, Pete.  This was the lone Hrabosky card in the box, and I figured I would try to see if I could get a TTM return out of it.  I'm not disappointed!

Hrabosky signed for free, and included the inscription "The Mad Hungarian".  Pretty cool!

This is now, obviously a shift for me when it comes to TTMs.  I had previously only sent off baseballs to be signed, but with the cost of OMLBs, the terrible fading of many of my past successes, and lack of space, I am now moving more toward having cards signed.  I think this will help me get back some interest in TTMs.
Posted by William Regenthal at 5:35 PM