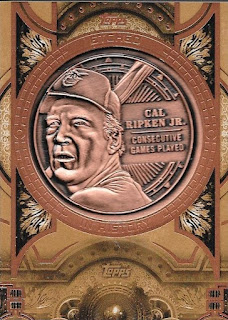 I got an awesome Christmas care package a few weeks ago from fellow blogger Judson (My Cardboard Habit).  In the package was a bunch of really cool Orioles cards that I needed.  The above Cal Ripken coin card is really cool, and one that I hadn't seen before.  It is a nice (and heavy) card that I can add to the Cal PC. 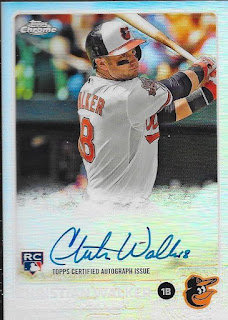 Judson included two Christian Walker chrome autos, one of which is the above refractor numbered 92/499.  This card itself is really nice in person.  I'm not sure what will happen with Walker, but I still like him. 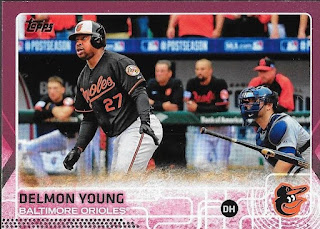 This pink parallel of Delmon Young is a really cool addition.  Take away the fact that Young has perennial anger issues and has made terrible life choices, his double in the 2014 playoffs will go down as one of the most memorable games I have ever attended.  It appears that the double is depicted on this card, and I think that is really awesome.  That make three cards that I know of that show photos from games I was at (the Mark Reynolds SP from a few years ago [2013 Topps, I think] and a Brian Roberts from 2006 Upper Deck).  This card is numbered 19/50.

Thanks for the package, Judson!
Posted by William Regenthal at 5:57 PM