A Belated Post About a Belated Package From Michael A. 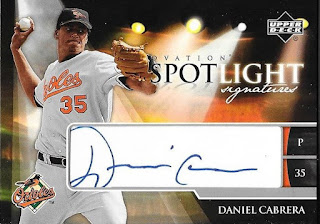 I have had this package from Michael A. from Instagram and Facebook since before Christmas, I think.  He didn't put a note in the package, and at one point it was at the bottom of my "to be blogged" pile, but the pile was accidentally knocked over a couple weeks ago.  I was able to keep everything together, but I realized that I had forgotten who these cards came from.  I embarrassingly posted them on Instagram and asked who had sent them to me, and Michael responded within seconds.

I remembered the Daniel Cabrera auto, but hadn't been sure who sent it, obviously, but since Michael said it was him, I remember now when we talked about it.  Cabrera was one of those pitchers who could (and did) get a pitching coach fired.  He had such good stuff, when he could trust and command it, but that consistent trust and command eluded him throughout his career. 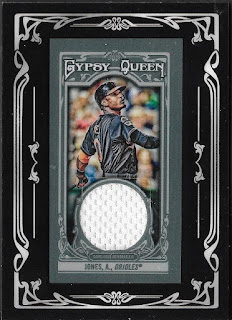 Another nice card he sent was this Adam Jones framed relic from 2013 Gypsy Queen.  I'm pretty sure I have one of these already, but I will gladly take others.  I like the look of the framed relics and autos from Ginter and GQ.

Thanks for the package, Michael.  I'm sorry it took me so long to post it, and I'm equally as sorry that I forgot who sent it.  Please include a note, next time!
Posted by William Regenthal at 8:58 PM