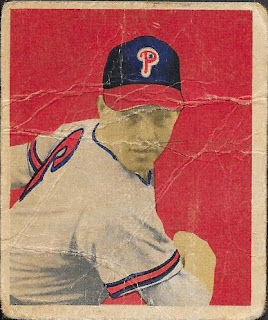 So far, this has been a pretty decent card show,  I have sold some stuff that I had been lugging around for a while, which is always nice, and so far, I have only bought one card for myself.

I knocked a card off of my Top Ten Wishlist pretty easily today when I had gotten up to stretch my legs and saw that Mr. Dean from Dean's House of Cards (not to be confused with Deans Cards) had some albums of lower grade vintage at really good prices.

I immediately saw his 1949 Bowman Robin Roberts, and while it had a nice price, I didn't have enough cash on me (on purpose so I wouldn't spend a lot), but when Mr. Dean said "I'll give you a better price on that." I had to see what he had in mind.

The price he mentioned was JUST below what I had on me, and I figured that I should go ahead and take the deal, which would serve two purposes, I wouldn't spend anything else throughout the show (not a bad thing, mind you) and I wouldn't be tempted to get up and walk around.

So, I picked this Roberts RC up to add to the collection, and I am really pleased.  This is a rookie card of one of the more underrated Hall of Famers around.  He was said to have been the best pitcher that Virgil Trucks saw pitch, so that carries a lot of weight with me.  This is also a really cool-looking card.  I love 1949 Bowman, and have a couple of them now.  I have Trucks, of course, Bob Feller, Roberts and a couple others.  The rookies in this set are really reasonable, so I might look to grab a few more in the future.
Posted by William Regenthal at 8:33 PM