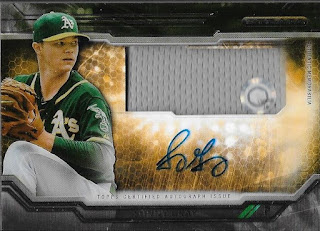 Recently, I won my first contest on Instagram.  Topps' Instagram account was giving away three boxes of 2015 Strata to folks that other Instagram users nominated.  A lot of my Instagram friends nominated me, and I ended up being one of the names that was drawn.  I had never won a contest like that before, and I was so very flattered that it came by way of others feeling like I deserved something nice.

The box itself was ok, I got a nice Rick Porcello relic/auto and a Yan Gomes auto.  The setup is one pack per box, two cards per pack.  So, I can't be all that disappointed, since I didn't pay for the box.  I can sell the cards I pulled at my next show, and just pick up a couple Strata here and there to make up for the ones the I sell.

I was really disappointed that Chris Davis wasn't on the checklist for Strata, otherwise I would be buying a bunch of his cards from there.  Instead, I went toward another PC player, Sonny Gray.  I got the same kind of card that the Porcello is, and am really happy with what I got.

This card is not numbered, but that doesn't matter to me.  The signature is on card, and the piece of jersey came from a game that Gray pitched (May 8, 2015).  He struck out 9 in 6 innings, but the A's would go on to lose due to a walkoff in extras.

I really like the Strata product, but am very disappointed that the cards don't really hold a lot of value.  Sure, I was happy to be able to get this Sonny Gray for my collection at only $10, but with 2 cards per ~$75 box, you would think the individual cards themselves would carry a much higher price-point.  I don't blame the actual cards themselves, because they are very high quality.  However, I think the checklist might be to blame.  I think that is the case all around the hobby when it comes to relics and autos, though.  I mean, Porcello, con't get me wrong, but I think bigger names should be what is in stuff like this, especially if folks are expected to pay $75 for a pack.  I guess I would have felt a little differently had I pulled a Bryce Harper, Manny Machado or Kris Bryant.  Cal and Manny are the only Orioles I have seen in the product.

Oh well, I'm happy with this Gray, and I am sure someone will be happy with the Porcello.  I know the person getting the Gomes will be happy, since it is going to a friend of mine.
Posted by William Regenthal at 11:04 PM