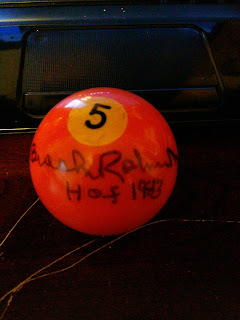 I got my Christmas gift yesterday from my good friend, Andrew.  He and I have been the best of friends for about 5 years now (wow, that's crazy).  When we went to the National together last summer, Andrew was struggling to find something to get signed by Brooks Robinson.  I had just seen an auction where someone had gotten a "5" billiard ball signed by him.  I thought that was pretty genius.  I mean, come on, the ball is orange and black (Orioles colors) and his number 5 is retired by the club.  Pretty awesome, right?

So, Andrew got his dad to let him sacrifice one of the family's pool balls, and Andrew got it signed by Brooks.  Even Brooks thought it was a cool idea.

I had no idea what to expect from Andrew for Christmas.  I knew money was tight for him, but he always sends awesome stuff, and includes really heartfelt notes.  When I opened this package, I had some tears come to my eyes, not only because the letter he wrote was really awesome, but also because I wasn't expecting him to give up this ball.

Andrew is a really good friend.  He is a great kid, who comes from an amazing family.  I have had the pleasure of spending time with all of them the last two summers, and it is now something I look forward to each year.  I have helped Andrew with his collection, sure, but I have also helped him with school and with life.  I feel like he looks up to me, and my hope is that I act civil enough and hold my crazy inside long enough to be a positive role model for him.  I have a lot of love for the guy.

So, thank you so very much for the great Christmas gift, my friend.  The letter you wrote was amazing, and your friendship is priceless.  Thanks, Andrew!
Posted by William Regenthal at 5:45 PM