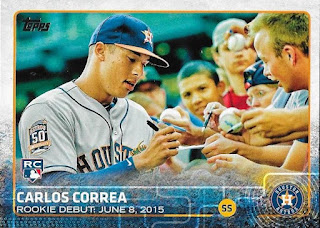 Actually, two trades were completed with Dugan, but who's counting?  Certainly not me, because I had to message him and ask him what I even sent because I forgot.  I also forgot that the main pieces I traded for were ones that immediately went to other people.  However, I'm getting way ahead of myself.

I met Dugan on Instagram a couple months ago, and it turns out, he is another collector from NC.  He came to the last card show that I was at, and we chatted for quite a while.  He's a pretty nice guy, and really easy to trade with.

I sent him a couple chrome autos, and he hooked me up with a few cards, like I said, that went to other folks.  He did, however, send me some extras in the form of a few rookie cards from 2015 Update.

I got this nice Correa RC and a Bryant from update that I will topload and put in my RC box.  I was hoping that Dugan would be at this weekend's show, but he is unfortunately not able to make it.  Better luck next time.  Thanks for the trades, Dugan.
Posted by William Regenthal at 9:00 PM