Welcome The Two Newest Members of the Hall of Fame 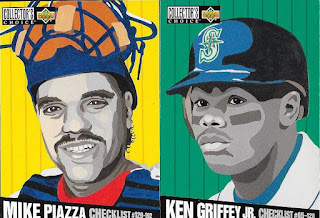 Today is one of my favorite days of the year, the day when the BBWAA announces the newest members to be enshrined in the National Baseball Hall of Fame.

While I had hoped that four names would be announced, only two made it this year.  It was a foregone conclusion that Ken Griffey, Jr. would make it on his first try.  He will be joined in Cooperstown by former slugger, Mike Piazza.

Jeff Bagwell and Tim Raines narrowly missed the cut, so it is highly likely that those two will be among the group called next year.

I had hoped that Bagwell would make it, since I already have a baseball signed by him; it would have made my HOF total go up.  I had a chance to pick up a Griffey at the National for a ridiculous price, but I passed because I felt it was too good to be true.

With tonight's announcement, that gives me two more guys I can pursue for my collection, which is nice.  This beats the Veterans Committee (or whatever they are calling it these days) because those guys are a lot harder to find.

Griffey received the highest voting percentage in history, with 99.3% after being named on all but 3 ballots.  He breaks the record that was held by Tom Seaver who had 98.84% in 1992.  I want to know who the three idiots are that felt that Griffey wasn't a Hall of Famer.

Next year, Bagwell and Raines will be on the ballot along with newcomers Vladimir Guerrero, Ivan Rodriguez and Manny Ramirez.  I'm interested in seeing what happens with Ramirez, since he was pegged twice for PED use.  Ivan Rodriguez is a Hall of Famer in my mind, but he was named in Jose Canseco's book as a user and deflated once MLB started testing.  I would like to see him get in, but we shall see.

Overall, I am please with how the vote turned out today.  I'm glad the BBWAA took votes away from folks (about 100).  I think they should continue to do so to the people who use the voting process as a means for attention.  I think the changes made to the process, though, have worked.  You're still seeing the right guys get in, I feel.  There are a few over the last several years that I kind of question (Larkin being the most obvious one), but in the end, I like the process.
Posted by William Regenthal at 7:31 PM