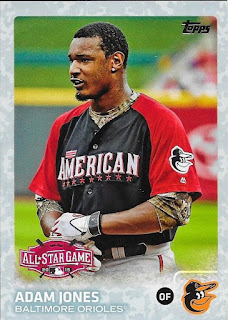 I completed a trade recently with a guy on Instagram named Josh F.  He and I have traded before, and this time around was no different.  He is a friendly guy, and collects some guys that I normally wouldn't be able to unload in Patrick Corban and Jason Grilli.  He offered me this Adam Jones snow camo from 2015 update and in return I sent him a few Yankees parallels (notably, a Robert Refsnyder) and some Corban and Grilli cards.

I think Josh was pretty happy with the package I sent, especially since he was going to a signing with Grilli not too long after we made the deal.  If I remember correctly, he was able to get all of the cards I sent signed.  Not bad.

This is a pretty nice Joney from update.  It is  numbered 61/99 and shows him in his All Star jersey from this past year.  I think it looks pretty cool.

Thanks for the trade, Josh!
Posted by William Regenthal at 7:52 PM