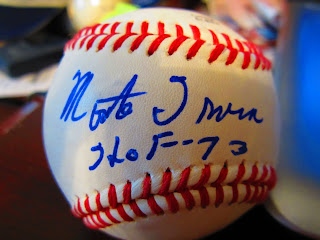 Over the course of the last two days, two huge names have left this world and have moved on to the next one.

I was shocked and blown away yesterday morning to hear that music icon, David Bowie had passed away sometime Sunday.

Today, when I was checking on some Oriole news on Twitter, I saw that Hall of Famer Monte Irvon had passed away at age 96.  Irvin wasn't necessarily a shock, since he was 96, but it still stung nonetheless.  He was a baseball pioneer, one of the last remaining players of a bygone era.  He was also very good to fans and a great TTM signer.

The above baseball was one I got TTM back in 2010, which I have since flipped to my good friend, Andrew.  I had replaced that ball with a PSA one from Historic Autographs Ball of Fame.

Irvin was a great ball player in his time and is regarded as one of the best to have come out of the Negro Leagues.  It was widely speculated back then that he would be the player who would break the color barrier, but Branch Rickey went with Jackie Robinson instead.